I’ve gotta admit…I’m no cook. Left to my own devices in the kitchen, I’ll invariably make my signature dish – beans on toast – every damn time, without fail. Delicious, nutritious and (pretty much) fool proof.

It’s not that I can’t cook, mind. I’m embarrassed to admit that as a teenager, I actually completed a two week course at world renowned cookery school Leiths – something my concerned mum forced me to do before Uni to ensure I didn’t end up living on a diet of beer, Chinese takeaway and baked beans once I’d flown the nest. And her plan worked…for a while at least.

When I was a bachelor in my 20’s, I cooked all the time; soups, curries, chillies, fajitas, my famous pesto chicken…all sorts. But after meeting and subsequently marrying my other half, Rosie – who happens to be the most amazing, adventurous cook I know – everything changed.

You see, from that point on, anything I attempted in the kitchen paled in comparison to her far superior culinary delights. As a result, it wasn’t long before I dutifully packed away my apron and took early retirement from all household cooking duties (I was always better at washing up anyway).

But recently, something has reignited within me; a passion for food that I thought had been lost forever, like that old jar of mango chutney we all have buried at the back of the fridge.

It all started after I attended this year’s Taste of London food festival, sponsored by AEG. 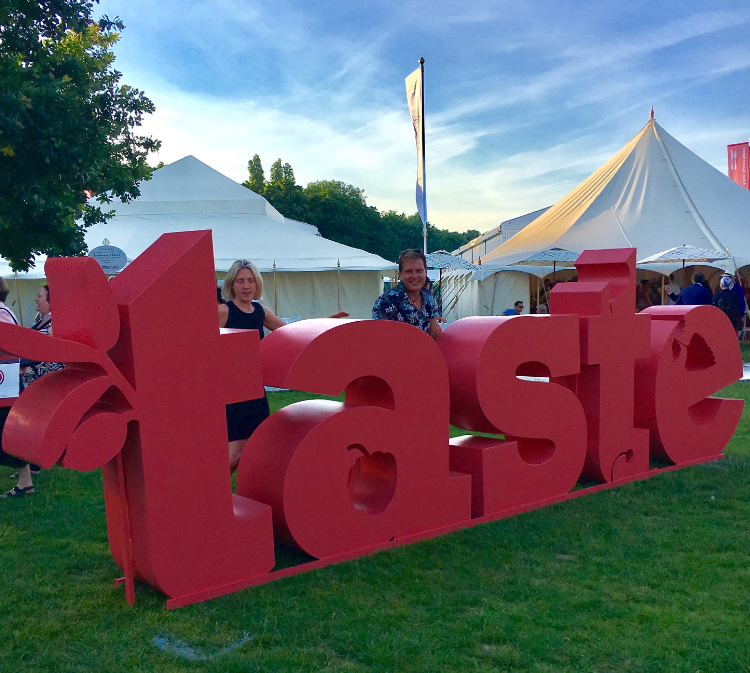 At the festival, I took part in an exclusive cooking master class with the School of Wok, where I got the chance to make some seriously delicious grub on the new, seriously high tech AEG Mastery Range, including their amazing touch screen MaxiSense Combi Hob (a million miles away from the basic gas hob we have at home).

Despite my lack of confidence in the kitchen, with a little encouragement and some simple directions, I massively surprised myself, somehow managing to singlehandedly cook up some amazing Chinese Pork Bao buns with Hong Kong Iced Tea to wash it all down.

Seriously…I didn’t think I had it in me, but whoa, they tasted incredible. 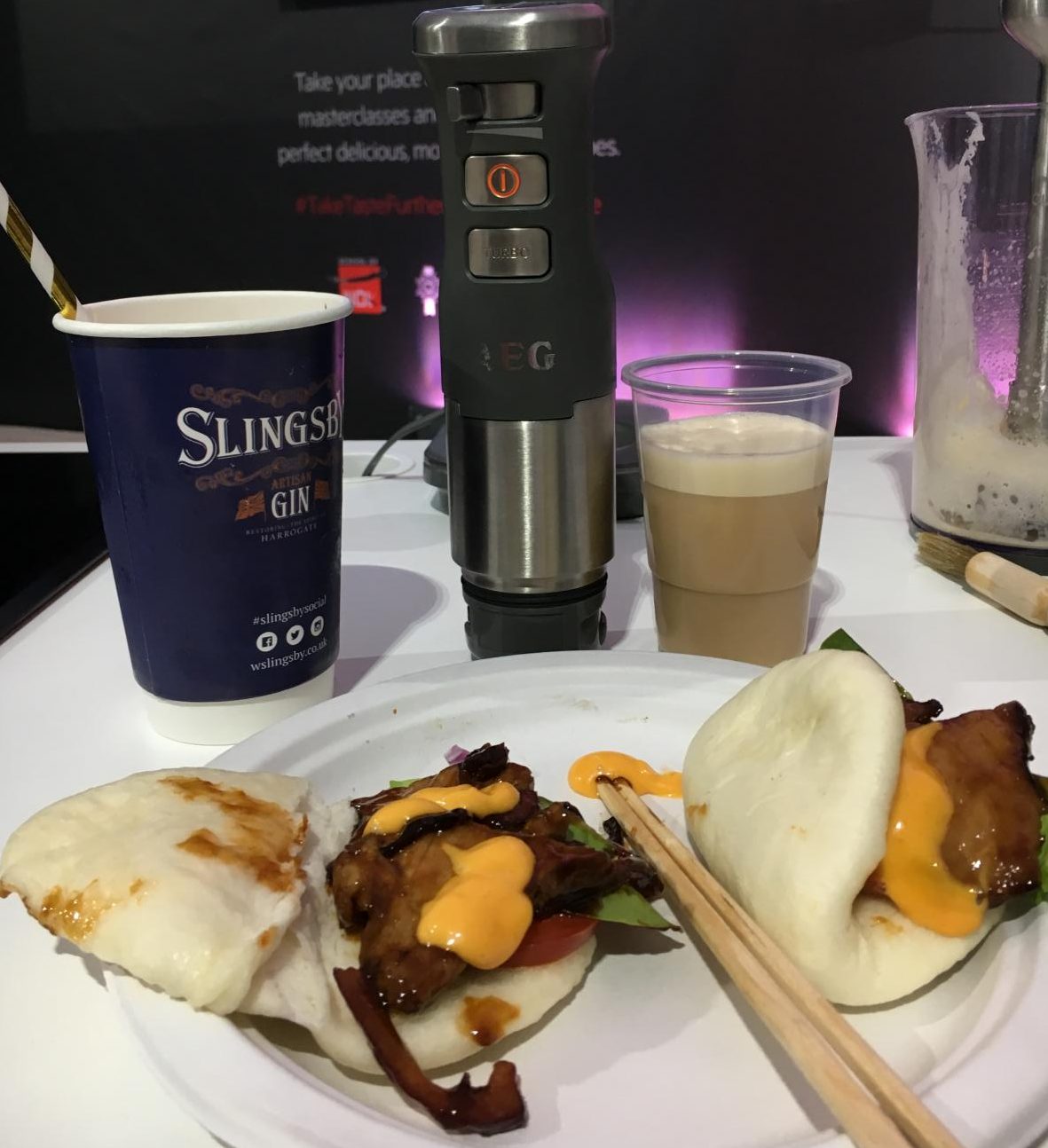 Not only that, but during the master class I also bumped into the superstar food blogger Diana from Little Sunny Kitchen who was stationed next to me throughout the session. Once it was all over, we grabbed a couple of Moscow Mules and chatted until closing time about food writing and recipes, while perusing the food stalls on site.

Feeling inspired, I asked Diana to set me a personal challenge; to cook one of her recipes for Rosie, from scratch, all by myself…quite a tall order given my limited cooking experience over the past few years.

And so, knowing my love of baked beans, Diana provided me with a recipe that she knew I’d be able to sink my teeth into – her Middle Eastern white beans with meat in a tomato sauce – a dish her mum used to make for her when she was little. 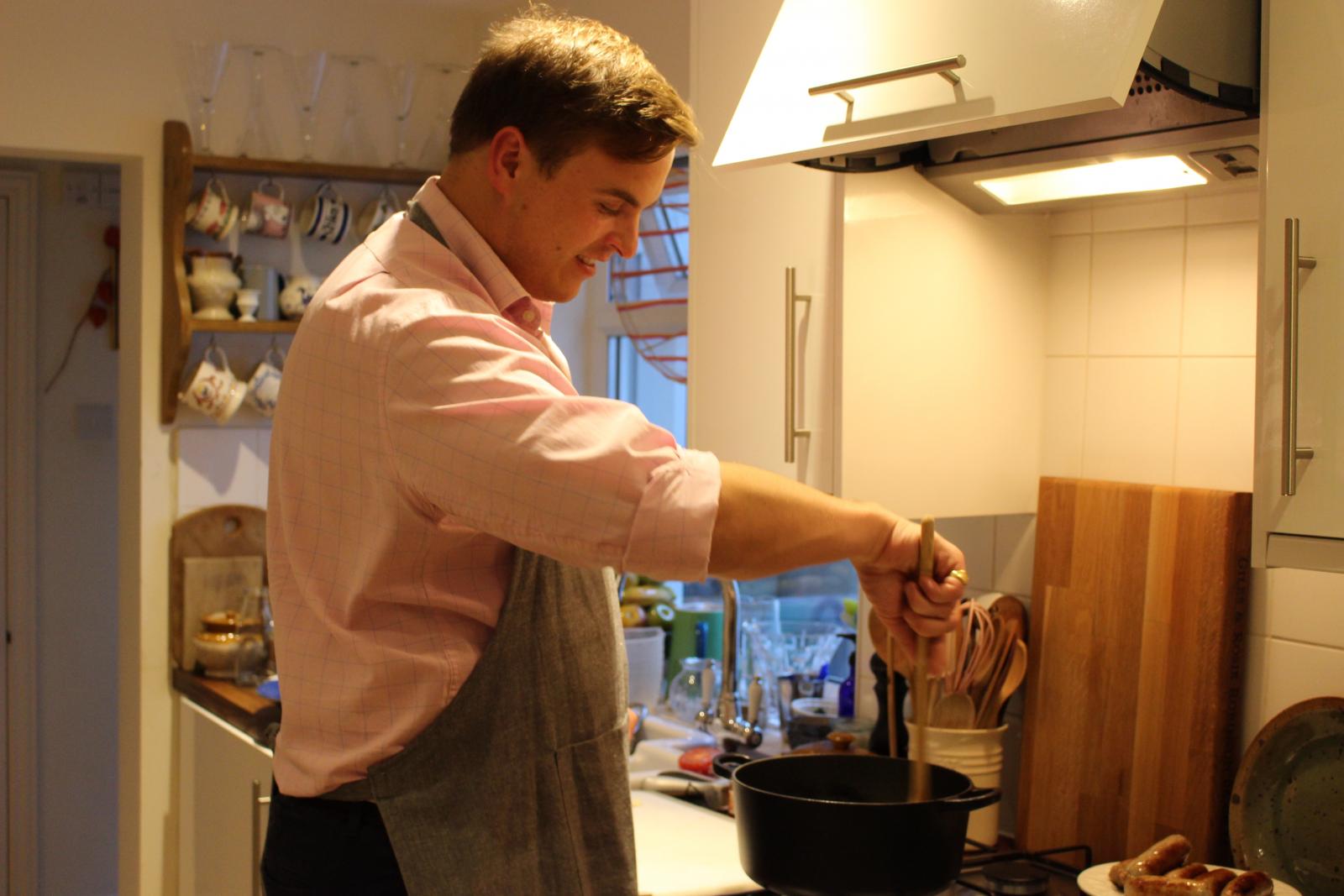 So last night after work, putting my money where my mouth is, I instructed Rosie to go put her feet up while I sorted supper for a change. Although she was pretty reluctant at first to hand over control of the kitchen, I assured her I would do my very best not to burn down the house.

And I’m pleased to report that (aside from a moment of minor panic trying to tell the difference between cumin and cinnamon), the experience went off without a hitch, and 45 minutes later I managed to serve up my first culinary creation in years (that wasn’t baked beans or scrambled egg on toast).

And you know what, it was seriously delicious (even if I did slightly over-reduce the sauce!) and tasted all the better knowing that I’d made it myself . 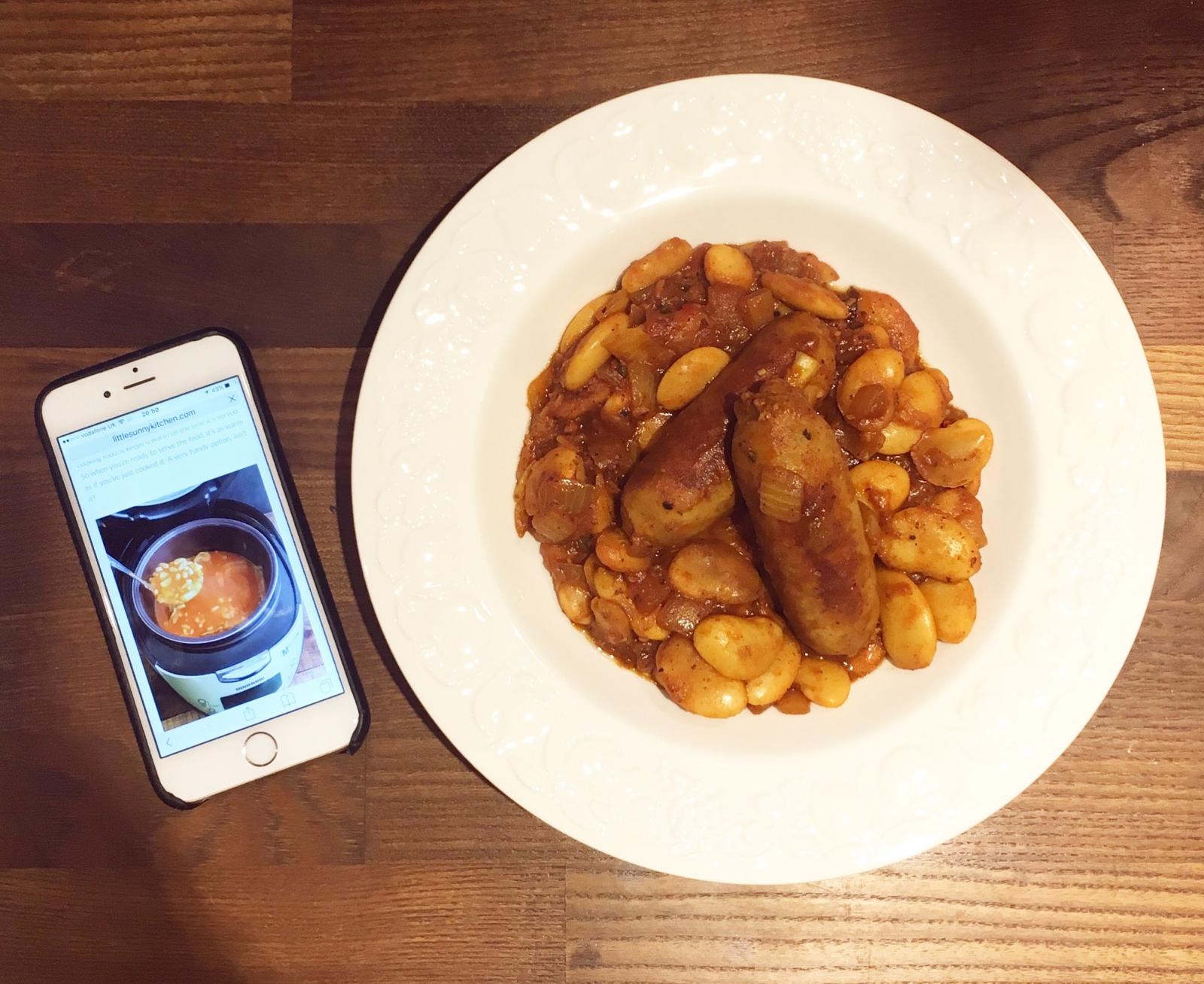 So before I go, I’d just like to send a big thank you to Diana at Little Sunny Kitchen for her recipe, and the AEG team at Taste of London for giving me back my cooking mojo, at last.

I guess the only thing left to say is; what should I cook next?! 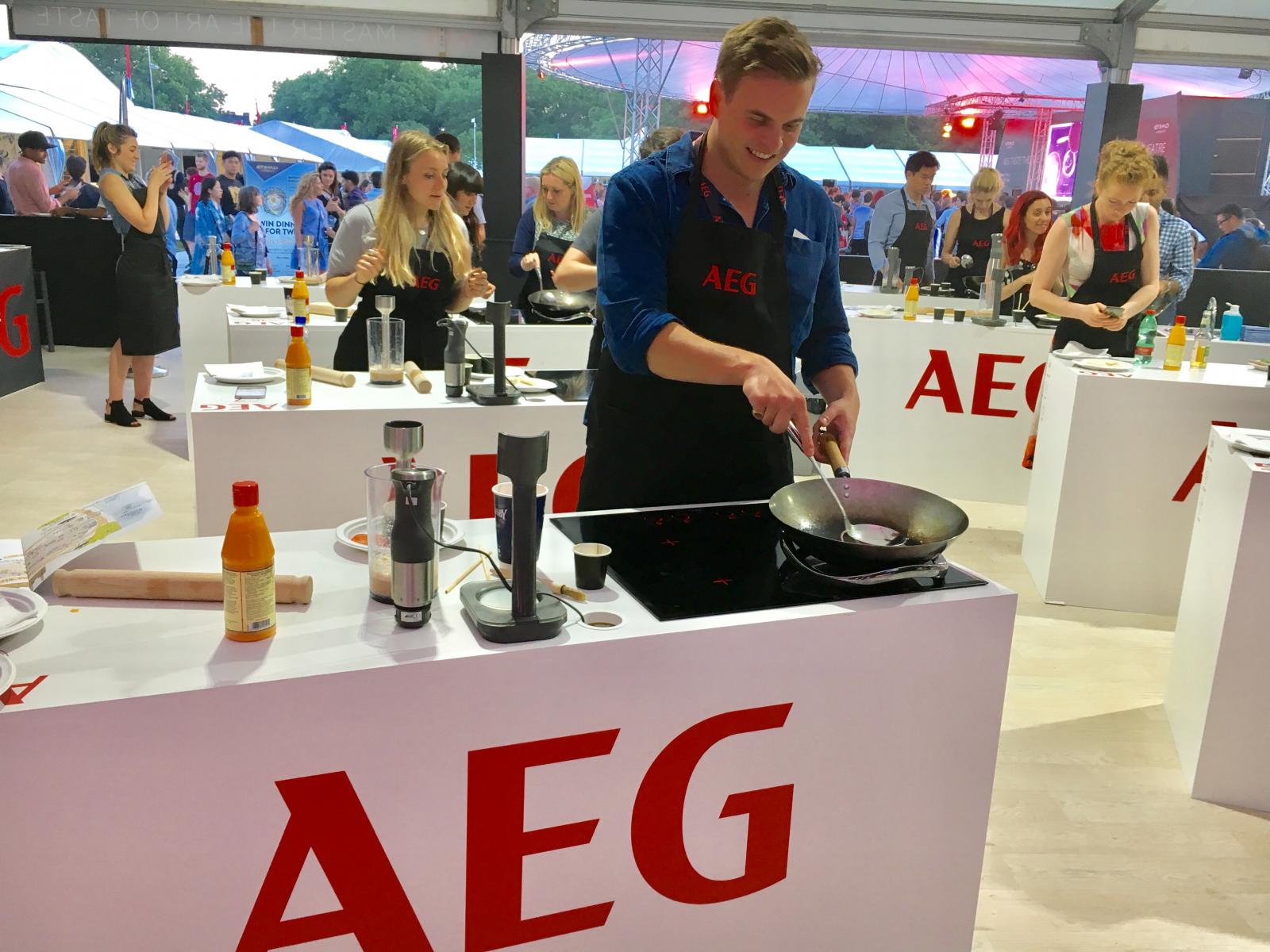 This post has been written in collaboration with Taste of London sponsors AEG, whose new Mastery Range is out now and includes the SenseCook Oven, Hob2Hood, MaxiSense Combi Hob, CustomFlex fridge and the Comfort Lift Dishwasher.