If you’re an avid reader of my blog, it’s highly likely that you’ll know the following two things about me. Firstly that I’m the proud uncle to twelve adorable nephews and nieces. And second, that I’m a complete stickler when it comes to punctuation and grammar. Add these two traits together and you’ll soon discover one of my biggest pet peeves; parents who communicate with their children (and, worse, with each other) in baby talk.

Now I understand it can be difficult to hold back the ‘coochie-coos’ when in the presence of a newborn. Fair enough…

And I get that many parents find it embarrassing to refer to kids’ private parts with their true biological names, preferring to call them a ‘willy-vanilli’ or a ‘shnoo-shnee’ instead. Totally understandable…

And of course, I can absolutely see how, in the absence of any adult company, even the most strong-willed new parents might go a bit stir crazy and succumb to the baby talk bug.

But what I can’t get my head around is why some parents actively encourage their children to continue saying words that they know are incorrect, by incorporating said words into their own adult parlance…

So, as an impatient first time dad in waiting, I ask; Let me set the scene with a few real life examples from my own family (who, by the way, suggested I open up this topic for public debate):

“Time for bed now…turn off the ‘lelly’! Go on; just press that big red button on the ‘ontroller’.”

BABY TALK TRANSLATOR: Push = Shoes (after my nephew confused the two words having been told to push whenever his parents put on his shoes)

BABY TALK TRANSLATOR: Digger = iPad (a new synonym from my other (car and vehicle fanatic) nephew who refers to his parents’ tablet as a ‘digger’ after solely using the device to look up pictures of heavy machinery)

I get it…it can be totally adorable when kids get words muddled up. And I understand parents’ reluctance to let their little ones grow up, which of course they seem to do way too quickly.

But is such cuteness really reason enough to encourage them to get words wrong, by making them part of your family’s daily conversations? 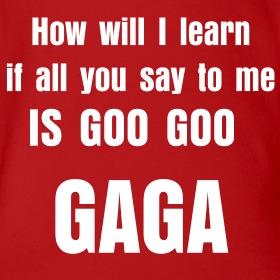 What happens when they go to school, still referring to bananas as ‘nahnahs’ and biscuits as ‘bistics’, only to be corrected by their more verbally advanced peers? Will there be pointing? Laughing? Even playground exclusion? And will they blame you, their parents, for misleading them this whole time?

But after years of discreetly tutting every time one of my older siblings reverted to baby talk with their kids, I was recently surprised to learn that doing so may actually be beneficial, not harmful, for children’s language skills.

“If you’d asked me a few years’ ago whether encouraging baby talk was damaging to a child’s speech and language development, I probably would have agreed with you,” said Marina Carosio, an Early Years Practitioner (and my cousin!), who has worked in childcare for over 10 years and also has four kids of her own.

“But according to the latest Advanced Child Development theories, the most important ingredient of early speech development is to encourage your child to start speaking in the first place. Using words they enjoy listening to or are familiar with is often the best way to do so, while giving them the confidence they need to learn.”

“The main thing is to get your child to practise using words, even if they are made up or incorrect. Then, once they are ready, they will naturally evolve to using the correct words and pronunciation.”

And don’t just take her word for it. A 2014 study by the Universities of Washington and Connecticut reached the same conclusion.

It found that one-on-one conversations using baby talk led to better language development in small children. Meanwhile the more exaggerated the speech and the more variance in the parent’s voice pitch, the more that one-year-olds in the study would babble, both in response and in general. By the age of two, those babies who had experienced more of this chatter knew more words than babies who didn’t.

So there we have it ladies and gentleman – it turns out that this pet peeve I’ve been harbouring as a non-parent for all these years is completely unfounded after all.

As much as it pains me, I can’t argue with actual scientific research and the opinions of true professionals, so will gladly (and publicly) admit;

My baby talk loving siblings were right all along. Soak it up guys…it doesn’t happen often!

So are you a fan of baby talk yourself? What are the funniest words or muddled expressions your own children have come out with? And, as parents, have you found yourself using these baby talk expressions in your own daily life? As always, please do share your stories with the Group via the comments section below!