I’m not going to sugar coat it for you…going on a flight with a baby is no fun. No fun at all. Even if you have the perfect chilled out baby, that has a watertight routine and falls asleep at the click of your fingers, as soon as you get on a plane, all that preparation goes out the window. 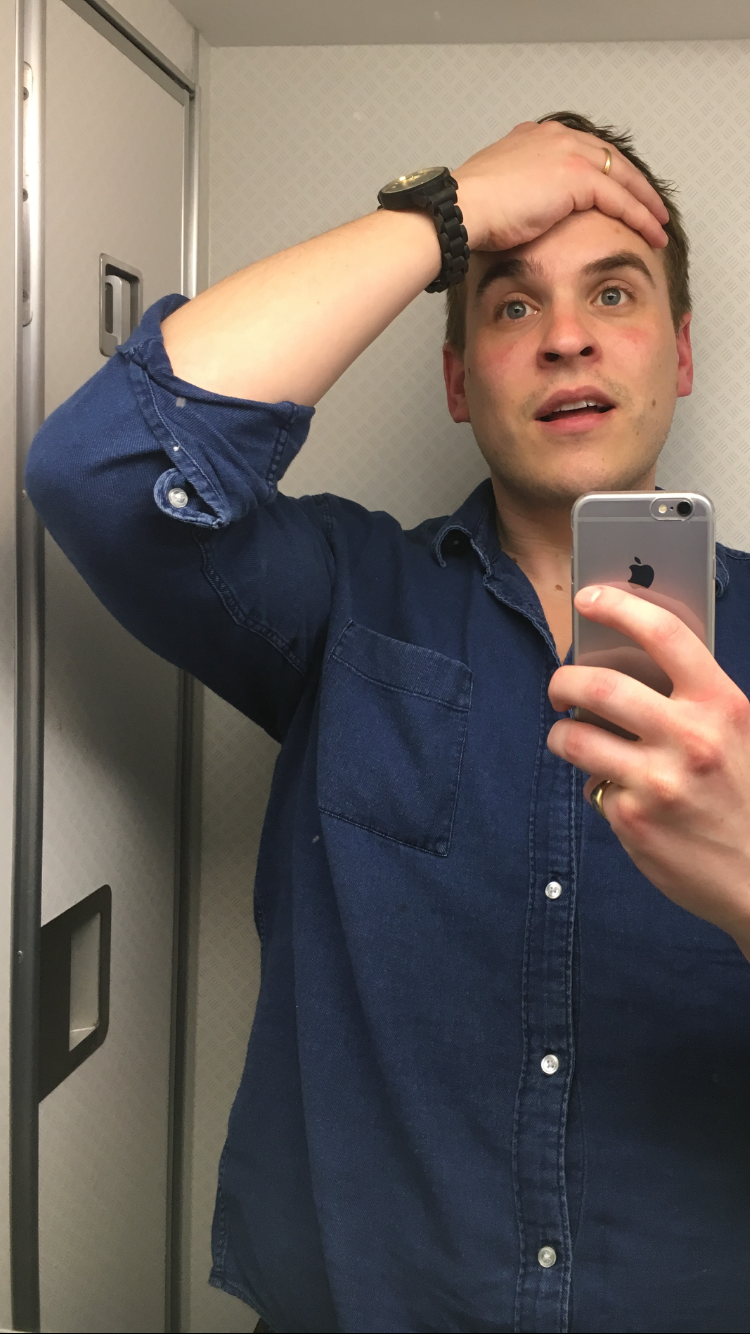 But after recently completing our sixth international flight in the space of three months (four short haul ones and two mammoth nine hour slogs!), I can definitively say that we’ve learnt a huge amount.

So to help out any first timers planning their first flight with a new baby, we’ve put together the definitive list of what you need to know, prepare and bring with you to make sure that your travels as a family go as smoothly as humanly possible.

So here goes…follow this list and you should come out the other side (relatively) unscathed. All that remains to be said is, safe flight and good luck! 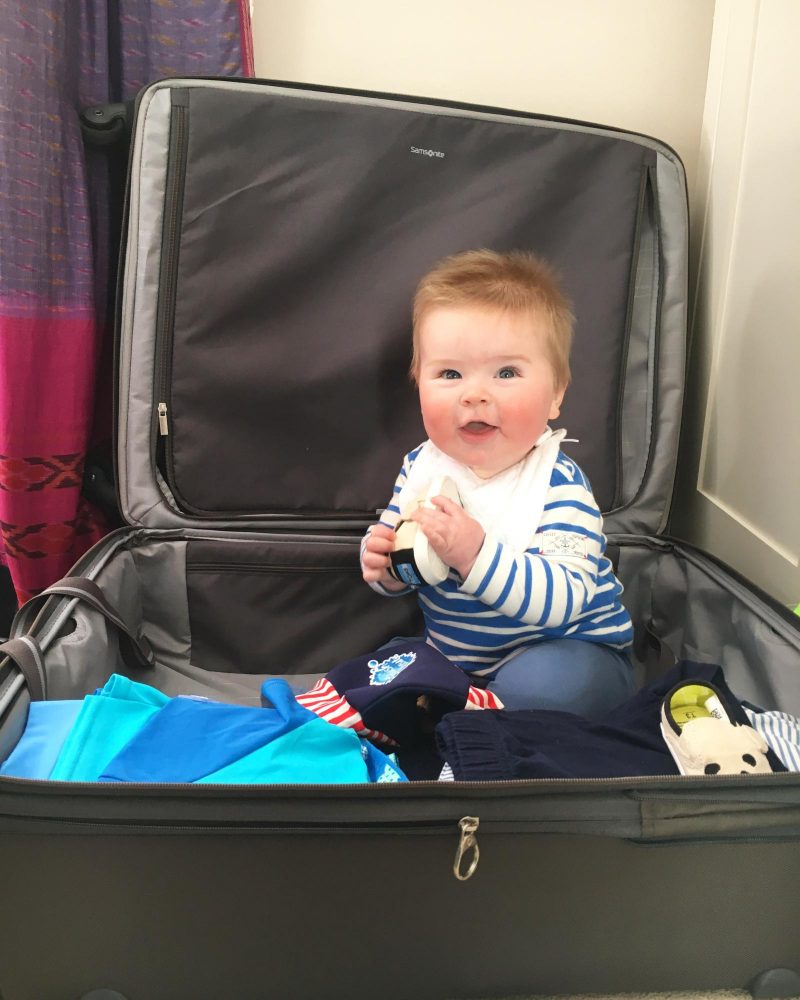 – For your hold luggage, pack seriously light for yourselves and take everything you could possibly think of for the baby…you’ll need it all.

– Even if you haven’t paid for a separate seat for the baby, they’re still allowed a piece of their own hand luggage (plus another ‘small bag’ each, and in some cases, their own suitcase for the hold). This is useful…very useful indeed.

– In said hand luggage, don’t bother packing anything for yourselves apart from (at most) a book and a pair of headphones. You are almost certainly going to have your hands full with the baby throughout the duration of the flight, so better to focus on packing things that will keep them (rather than you) entertained… 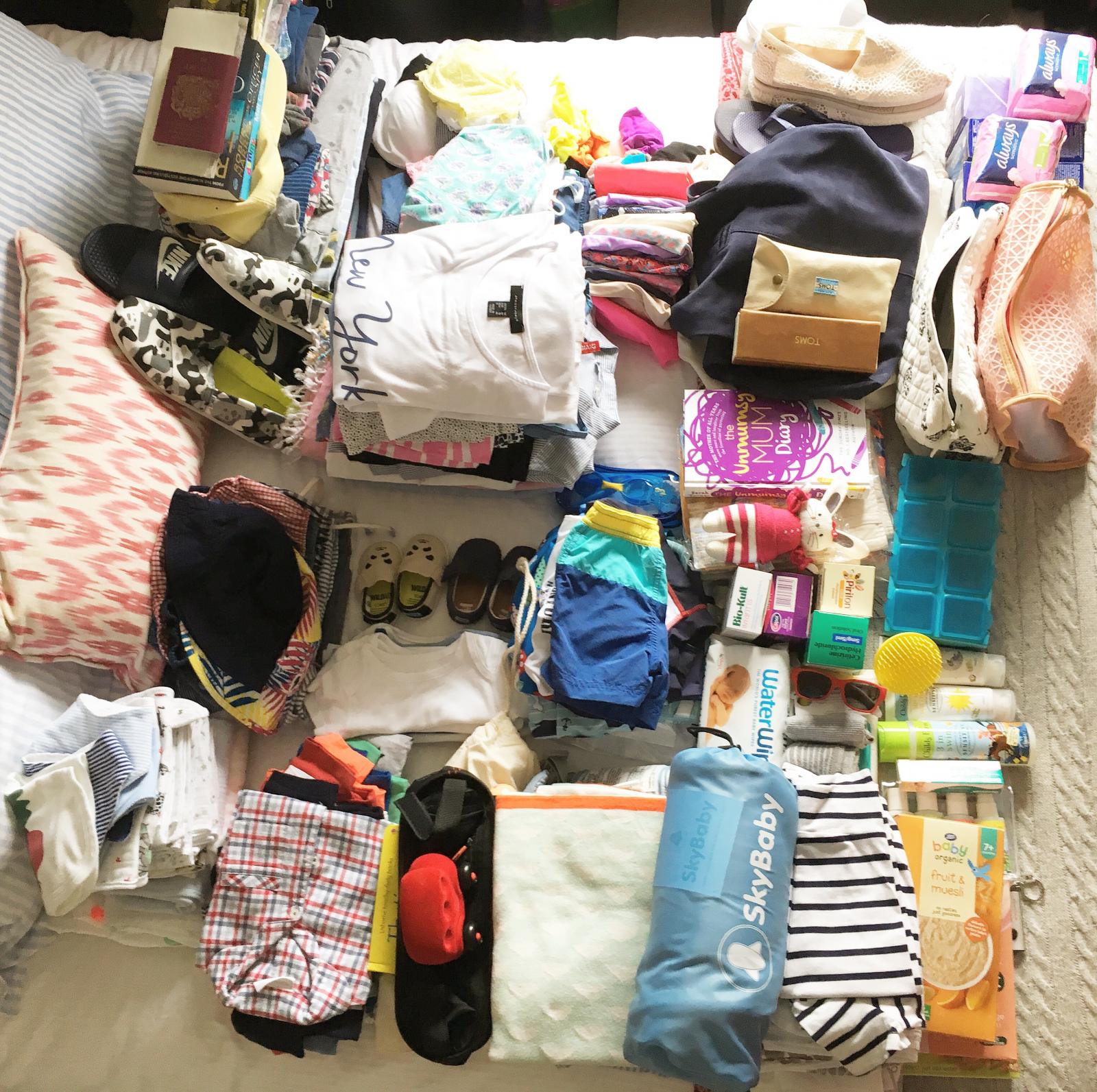 – One of the perks of being parents is that you’re allowed to take a shit load of liquids on the plane, without the usual 100ml restrictions. So long as you say at security “it’s for the baby” they’ll let pretty much anything through.

– If you’re formula feeding, consider taking an empty thermos flask in your hand luggage. You can fill it up with boiled water at Pret on the other side to use for making up bottles during the flight.

– Pack extra wet wipes; you will need THEM ALL on the flight.

– Don’t stress if you forget to pack something. Unless you’re going on holiday to Chernobyl, you’ll be able to buy whatever you need there.

– If you’re going on a long haul flight, give the airline a call at least a week before and request bulk head seats and a bassinet. Usually they can accommodate this without you having to physically pay extra to reserve them.

– Be aware though that if your baby is over six months’ old, they’re unlikely to fit into the cots provided…but they’re still useful to have as a play area. 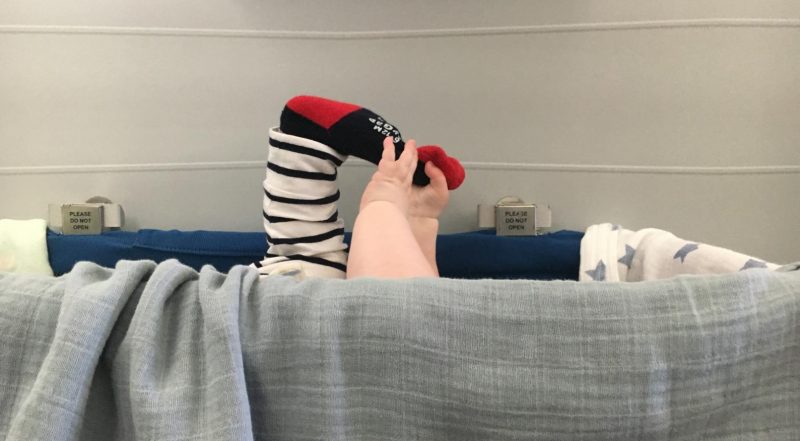 – Don’t bother checking in online beforehand. If you’re travelling with a baby on your lap you will need to physically check in at the airport anyway.

– You can take both your normal pram and your car seat with you on the flight, all the way up to the door of the plane…they’ll take it off you there and give it back on the other side.

– If you do take a car seat, make sure it has a cover/bag, so you can fill it to brim with nappies, blankets, tins of baked beans, whatever!

– But if I were you, I’d rent a car seat while you’re away (if you’re going to need one) as you’ll have a fuck load of other things to carry already.

– Don’t worry if you don’t have one of those whizzy prams that folds up the size of a matchbox and fits in the overhead locker…they are awesome but by no means essential.

– Get a taxi to the airport – sorting long stay parking, driving yourself and then getting a bus to the terminal with a pram, car seat and a million bags is just added stress that you don’t need.

When you arrive at the terminal

– Aim to get to the airport at least two hours before the departure time. In most cases, you’ll be the first ones in the queue for your flight so will have a better chance of getting assigned decent seats by the check in staff.

– Ask if the flight is full, and if not, whether you can have the seat next to you kept free for the baby. This has happened twice to us and is the biggest luxury. 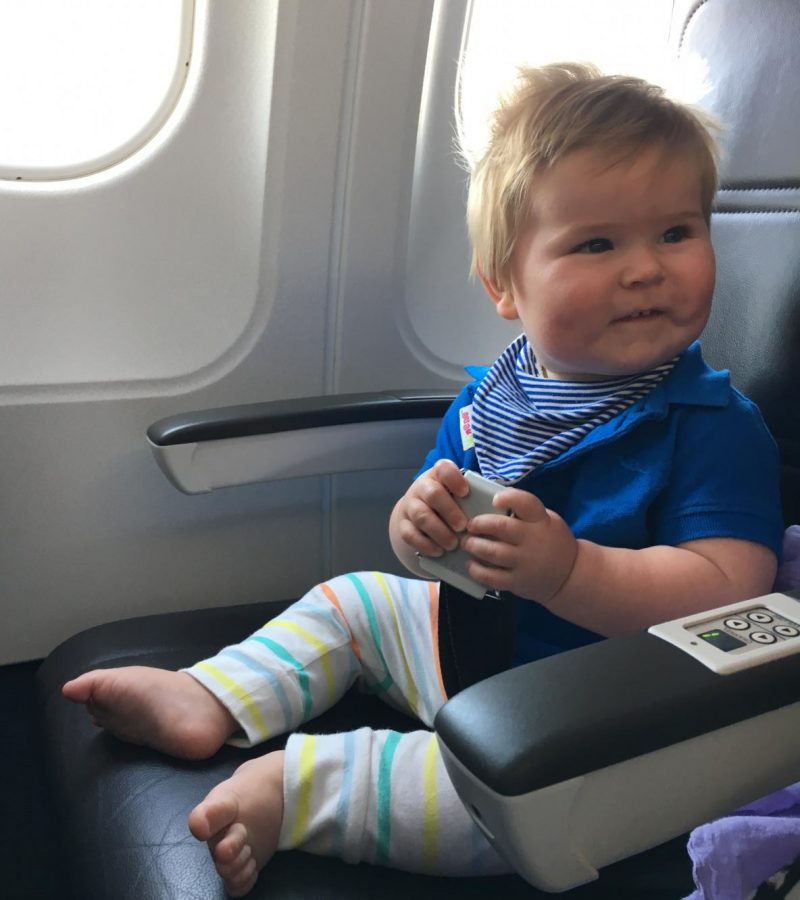 – Treat the check in staff like you want to make them Godparents to your new babe. Pay them compliments. Flirt a little. Get the baby to smile at them. Basically make them fall in love with your little family, and they’ll treat you like Will & Kate.

– If (after all that) you still don’t get good seats, turn on the water works. Nothing gets your more immediate special treatment than a howling mother cradling a newborn baby.

– Now, if your baby’s asleep in the pram while you go through security, don’t panic. There’s no need to wake them. They’ll let you push the whole pram through the metal detector so long as you take most of the junk out of the basket underneath it.

– Remember what I said about liquids? Just chuck them all through the scanner, repeating the phrase “it’s for the baby” and they’ll let it all through. They’ll do some extra tests on it on the other side but there won’t be any issues.

– Oh, and if you need to take any prescription medication for the baby, make sure their name is on the bottle/box, otherwise they won’t let you take it through. 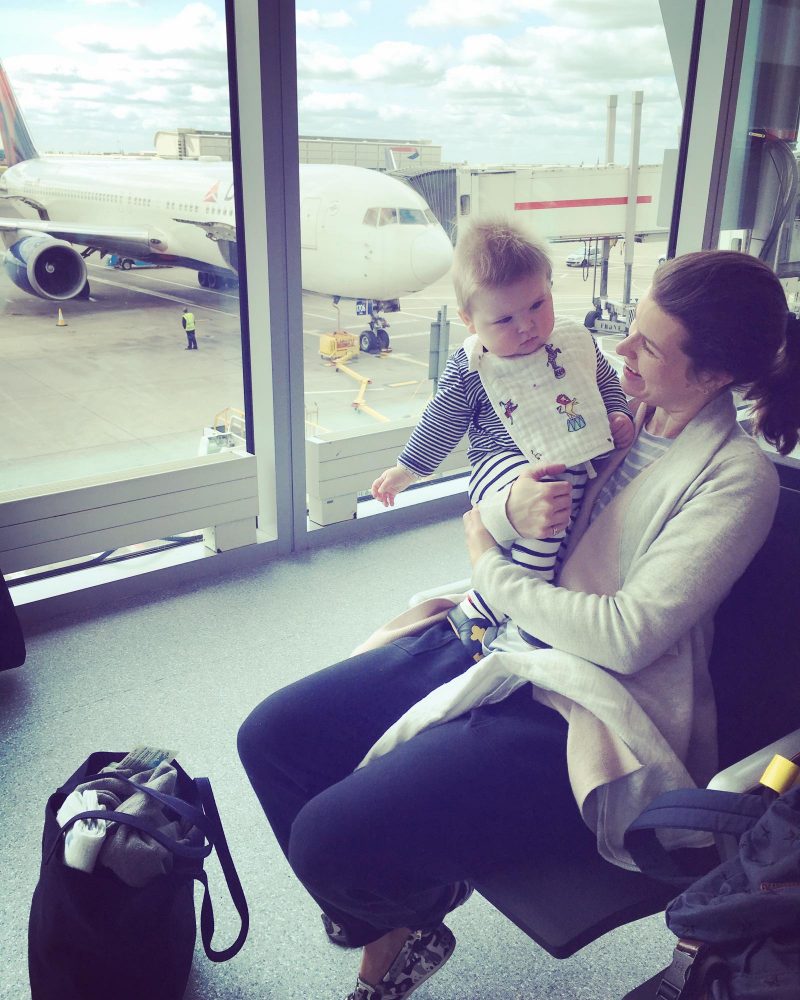 – Before you get on the plane, change your baby’s nappy then and there (easier than in the cramped airplane bathroom).

– And consider putting them into some comfy pyjamas too to get them in the mood for sleep.

– Once you get to the gate, ask the flight attendant if you can have priority boarding to get the baby settled before everyone else boards.

– Nine times out of 10, they’ll say yes. And let me tell you, that extra five minutes of calm before the storm will be invaluable. 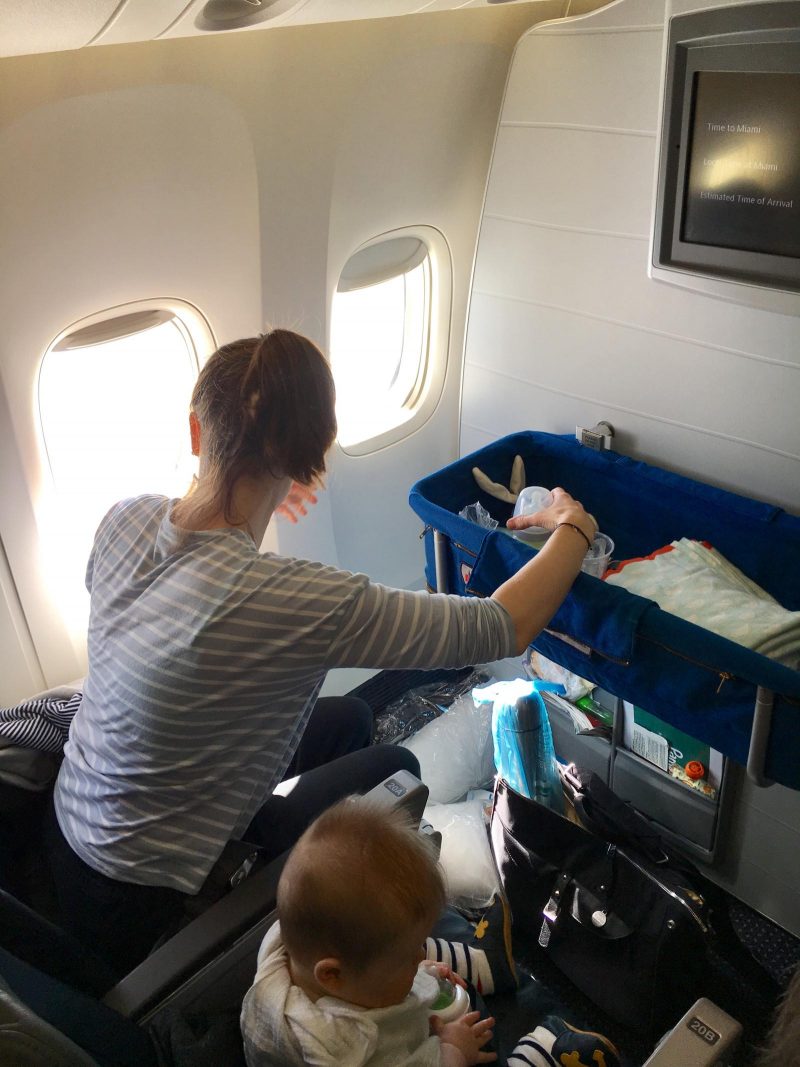 – Try to get yourselves settled and comfortable right away, with all the most essential baby kit easily accessible (i.e. not in the overhead locker).

– Befriend the cabin crew – they are the guardians of the food and know where all the alcohol is hidden.

– For take off, either breastfeed or give your baby a bottle of formula or water to drink during the ascent. The sucking sensation helps their little ears to pop, avoiding hours of painful screaming if they don’t. 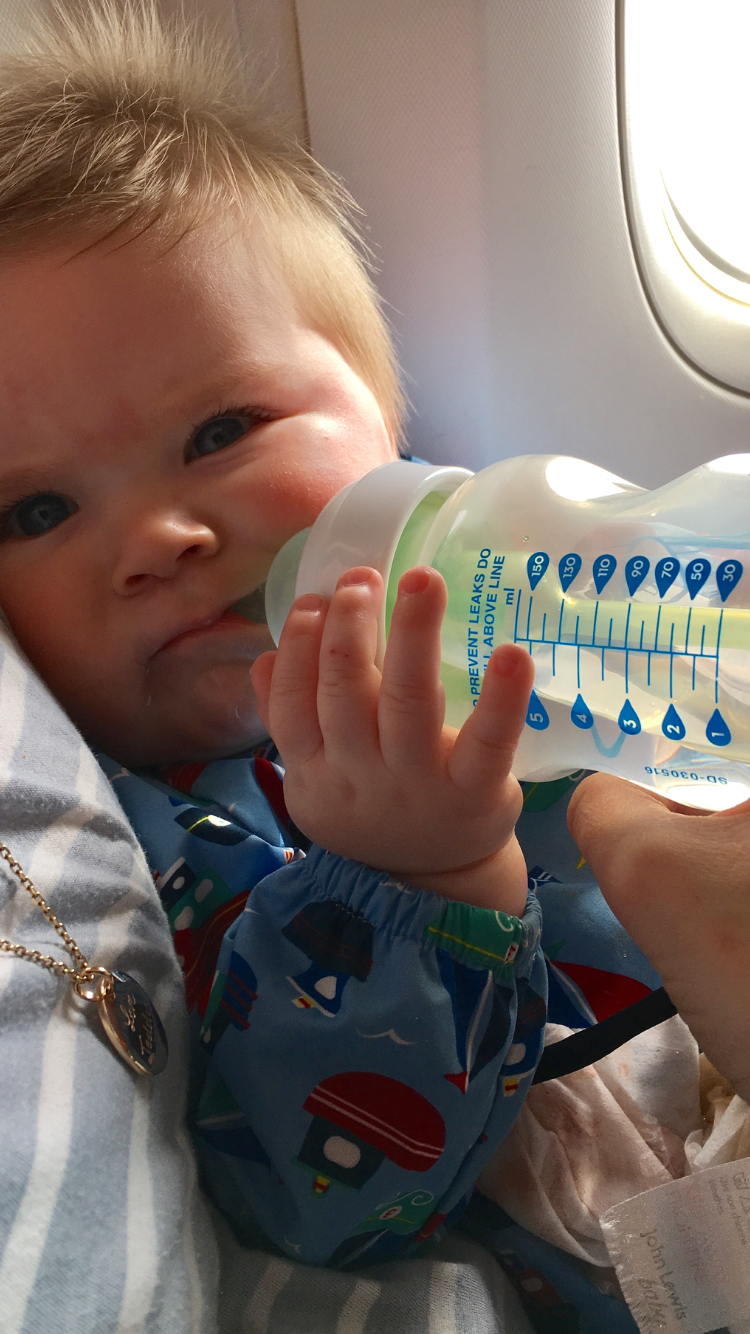 – If you’re weaning, have a pouch to hand too as the swallowing action also helps with the ear popping.

– Feeding a baby on a flight is a two person job, FYI…and be sure to give them their food before yours arrives.

– When the food trolley does finally come around, you will both be desperate to eat, but putting your tray table down with a baby in your arms is literally impossible.

– So ask the cabin crew to bring you one tray of food at the start and the second at the end. That way, one of you can eat while the other entertains the baby (and vice versa). Tag team it for the win.

– Whatever you do, don’t expect your baby to stick to their usual sleeping/eating/shitting routine on the flight.

– Unless you’re the luckiest mofo in the world, they almost certainly won’t. So long as you know that from the outset, you won’t be (too) disappointed. 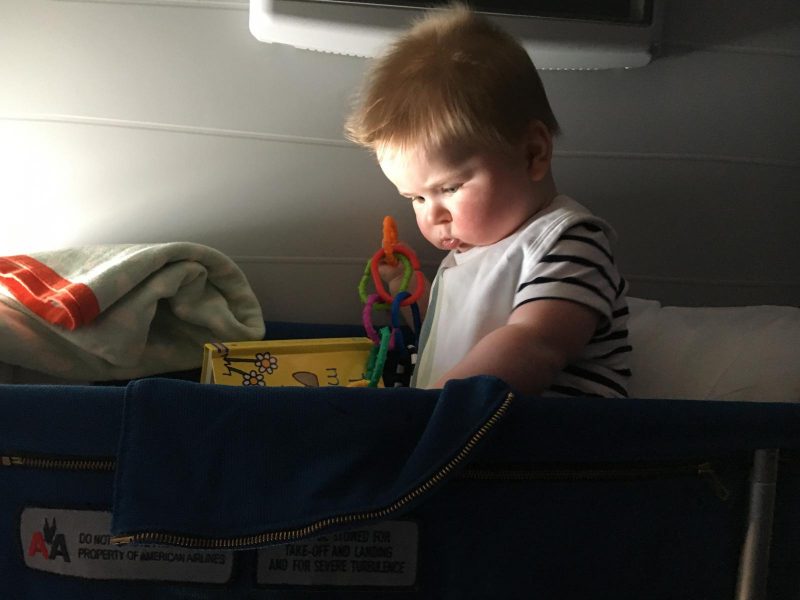 – For the duration of the flight, it’s your job to try and keep the baby entertained and as chilled as possible. This is almost impossible and takes constant work, so don’t beat yourself up about it.

– But a few things you might want to try are: 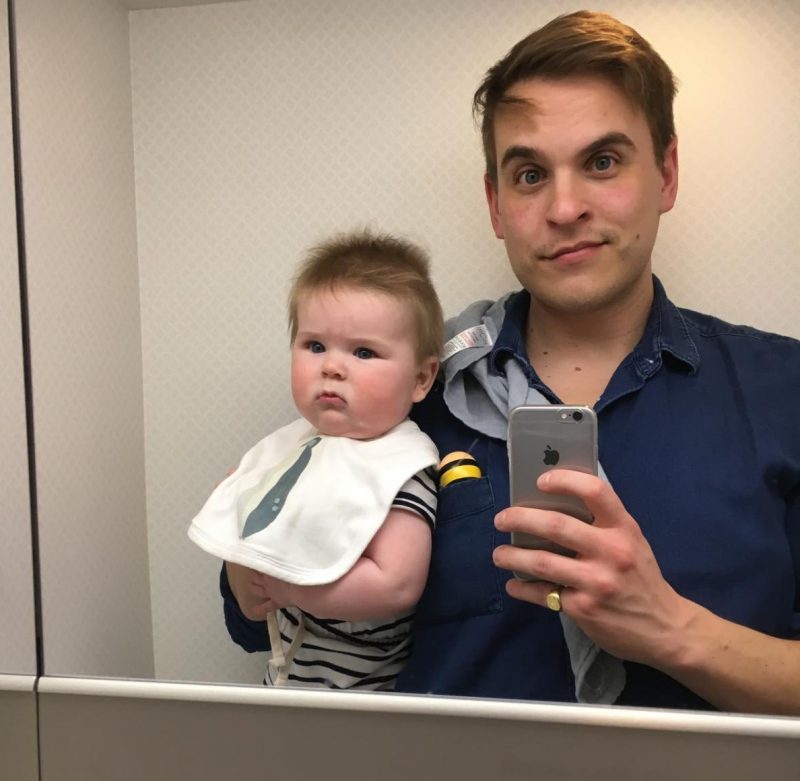 – Whether your baby sleeps or not, make sure you have a stiff drink (or five)…you deserve it. 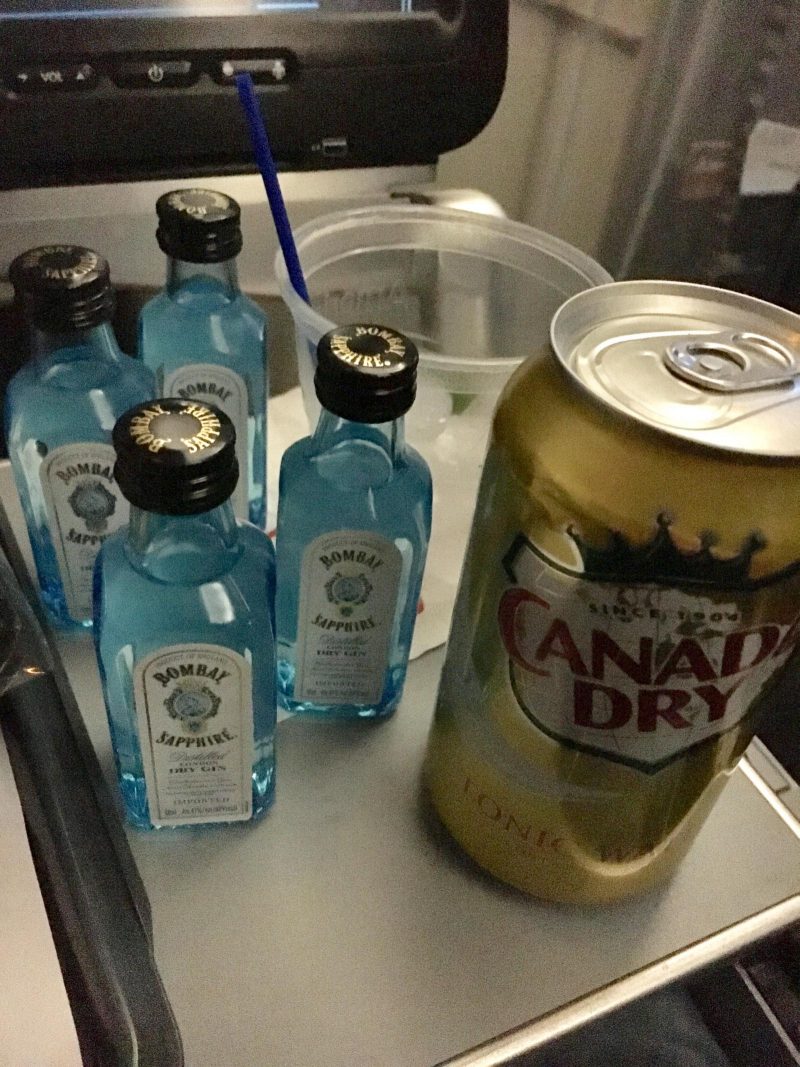 Getting your baby to sleep on the flight

– If your baby is teeny, bring a sling so they can fall asleep on you.

– If you don’t have one, just holding them really tight into your body works (pretty much) as well.

– If you’re going on a long haul flight but are worried you won’t be able to get a bassinet or bulk head seat (or you’re on a shorter flight/smaller plane where this isn’t an option), you can buy little baby mattresses for the plane like this one from SkyBaby. Great if your baby needs to sleep on you, as they can stay strapped in and just lie across your lap…much more comfortable for both them and you. 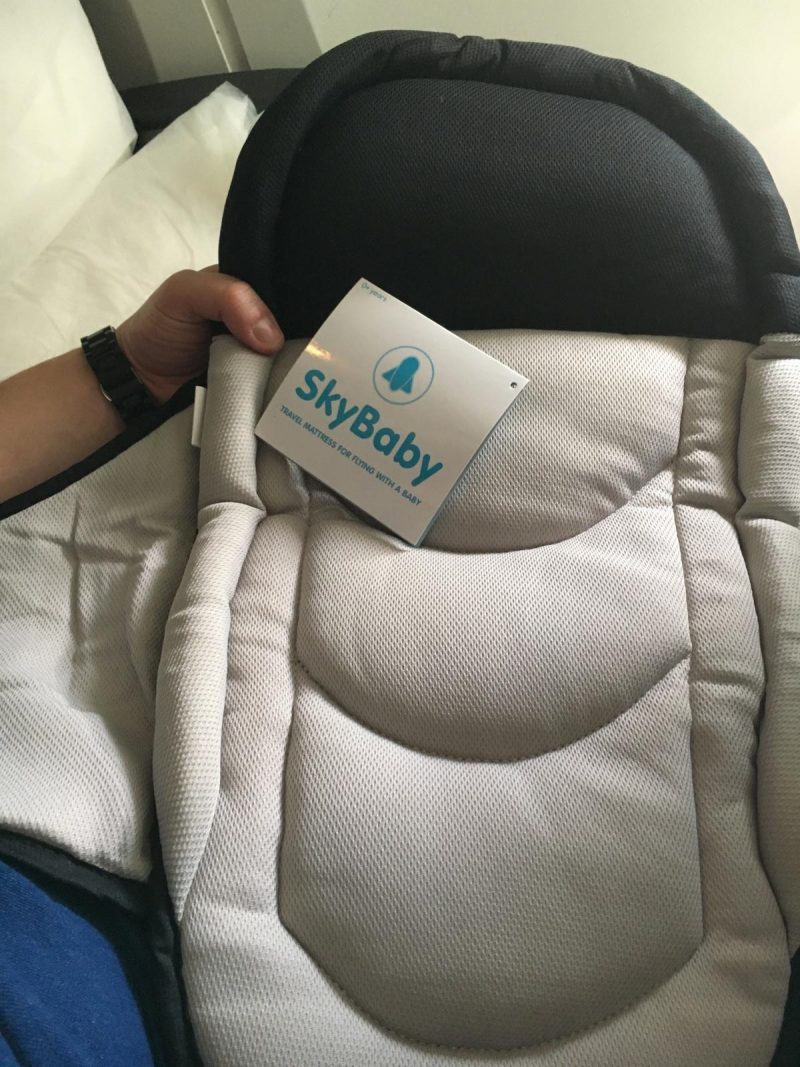 – If they still won’t go down, try standing with them at the back of the plane near the door where the buzzing of the plane is at its loudest. White noise is your friend.

– Once they’re (hopefully) dozing in the bassinet, make sure the area around it is as dark and secluded as possible (for example by hanging a large swaddle/muslin over the top as a canopy). Basically anything to keep potential distractions down to a minimum. 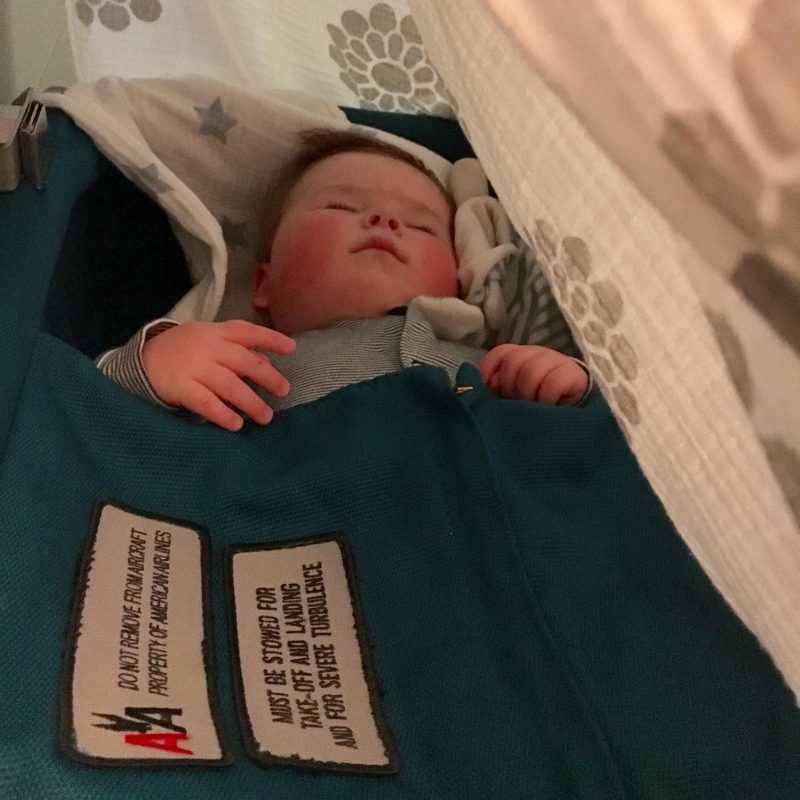 – Don’t apologise – the vast majority of people on the flight are parents, Godparents or grandparents themselves, so know what you are going through and are generally very understanding and lovely (even if your baby is being anything but).

– Of course there will always be one eye-rolling, baby-hating wanker on the flight, and they’ll usually be sitting next to you, tutting for the duration of the flight.

– But don’t worry…Karma is a bitch and they’ll get their comeuppance in some way. The snooty woman sitting next to us on our first long haul flight got a cup of coffee spilt over her by the air hostess, before an entire litre bottle of water poured onto her head from our bag in the overhead locker. Whoopsie… 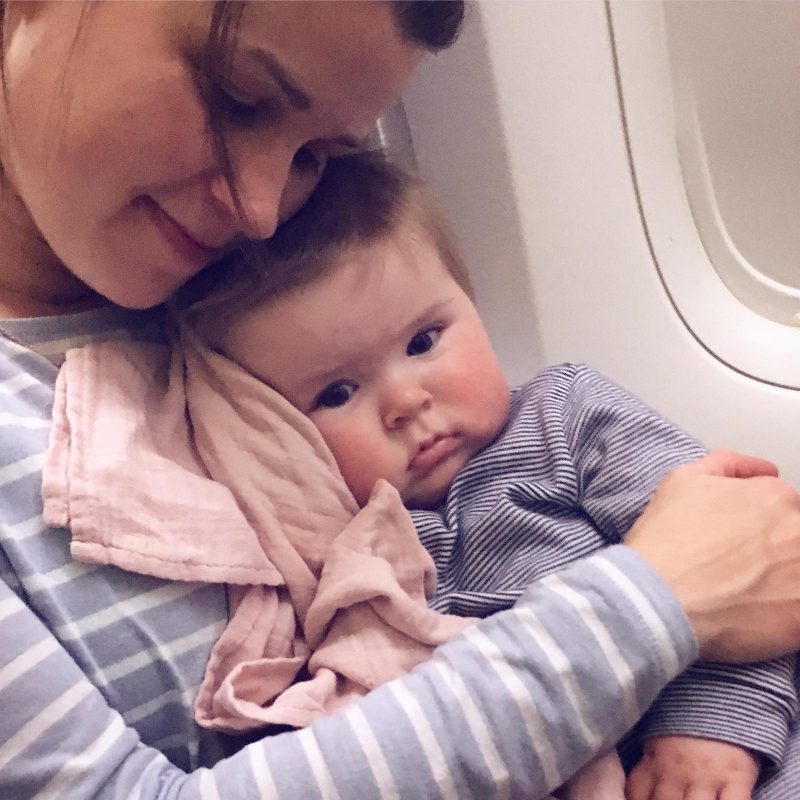 So there we have it! I hope you’ve found today’s list useful. If you have any other top tips for new parents about to embark on their first flight with a new baby, please do share them with the group in the comments section below.