As a working dad, I often feel guilty that I’m something of an absent father to my son. Leaving for work long before he wakes up every morning and coming home long after he’s fallen asleep each night, means the only real time we spend together is over the weekend. A sad state of affairs but, being the main breadwinner of the family, it’s one that’s unlikely to change as he grows older.

Because of this, I often worry that the fatherly influence I have on my son’s upbringing is significantly less than it could and should be. How can I teach him all the values and life lessons that I learnt growing up, if I only really see him two days a week? How can I ensure that he knows how much I love him, and how much I think of him, even when we’re apart?

With this in mind, I wanted to share with you today an amazing real life story that I discovered on Instagram recently, of a truly inspirational dad – an artist called Bob Guest – who managed to make a huge impact on his children’s lives, while imparting his fatherly wisdom to them in the most amazing way imaginable.

His story, as told by his 29 year old daughter Joanna below, has massively inspired me and I think you are going to love it too… 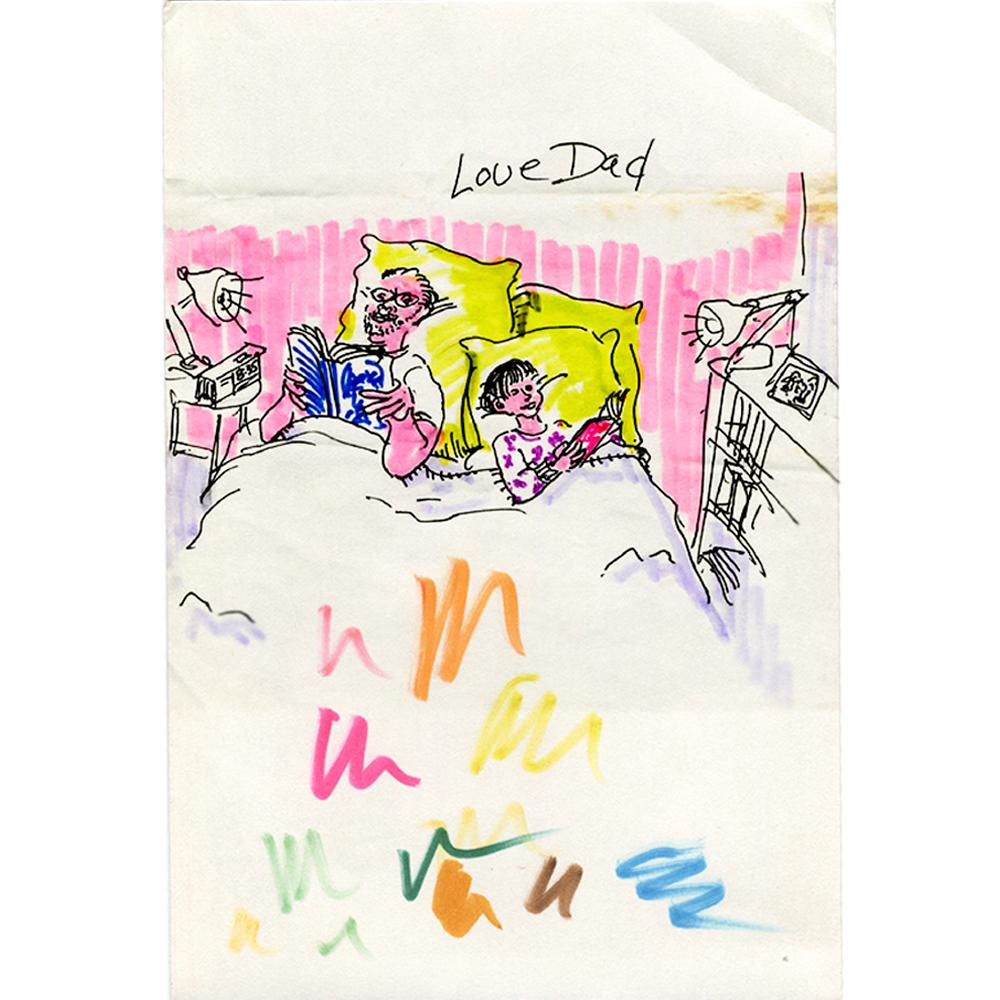 Expressing the important and intangible feeling of love, again and again…

For just over a year now, I have been working on a project called Folded Wisdom; a story which centres around a collection of more than 3,500 notes my dad wrote to my little brother Theo and me every school morning for 14 years.

To just call them “notes” hardly does them justice though, so let me explain.

Every morning, before we would even wake up and get dressed, my dad sat at the kitchen counter with a candle, notepad, pen, and a box of markers.

From there, he’d write. 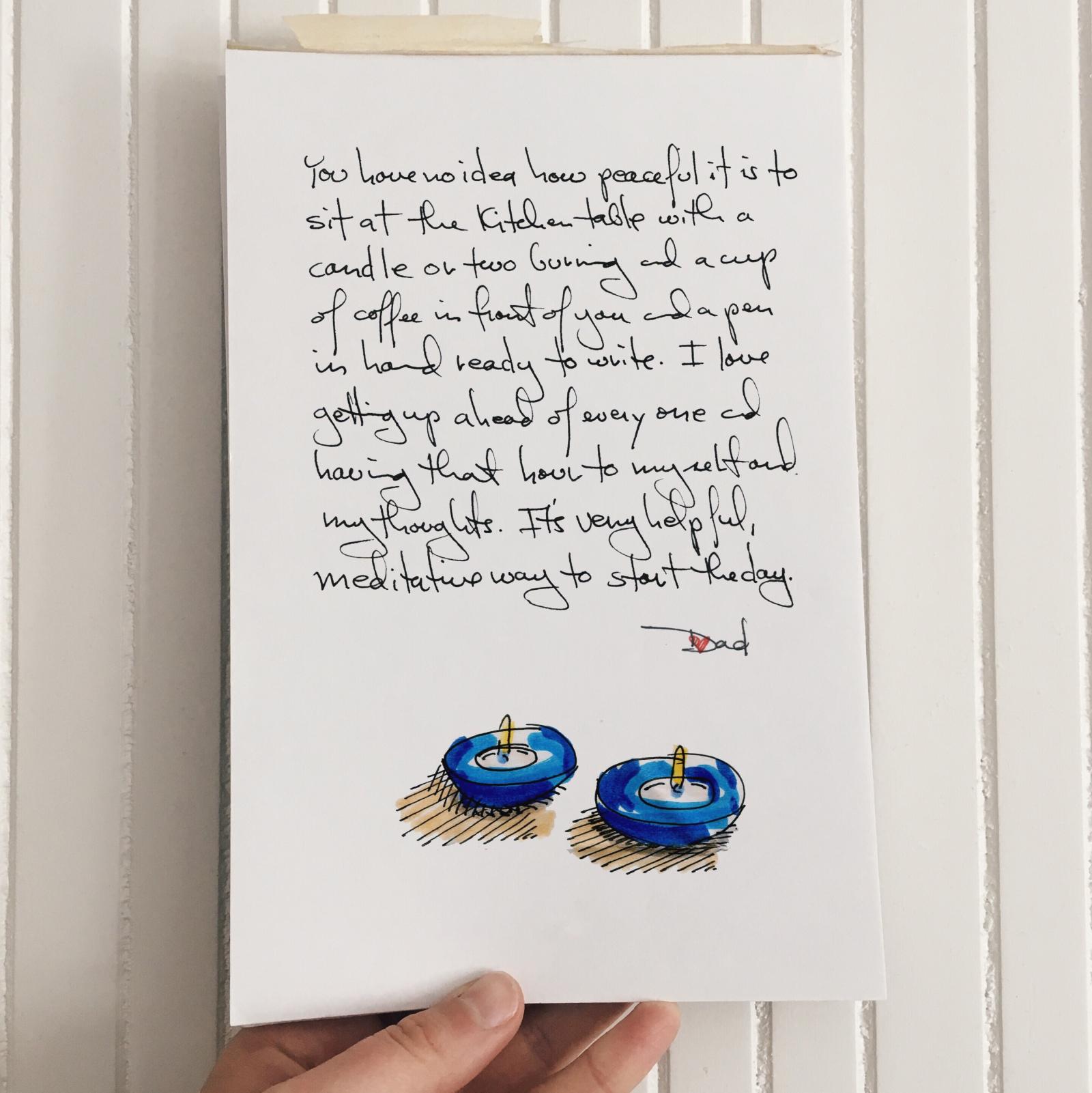 As a trained artist (my parents met at Pratt Institute, an art and design school in Brooklyn, New York) he’s always been comfortable expressing himself on the pages of sketchbooks. So to sit down and write to us every day was somehow not a daunting task. The empty page was a comfortable place he knew well.

Whether he’d begin by doodling a dinosaur, commenting on a tough exam we had coming up, or letting his mind wander about the way the light hit the snow on his early morning walk with the dog, he ultimately revealed a bit of himself to us every day. 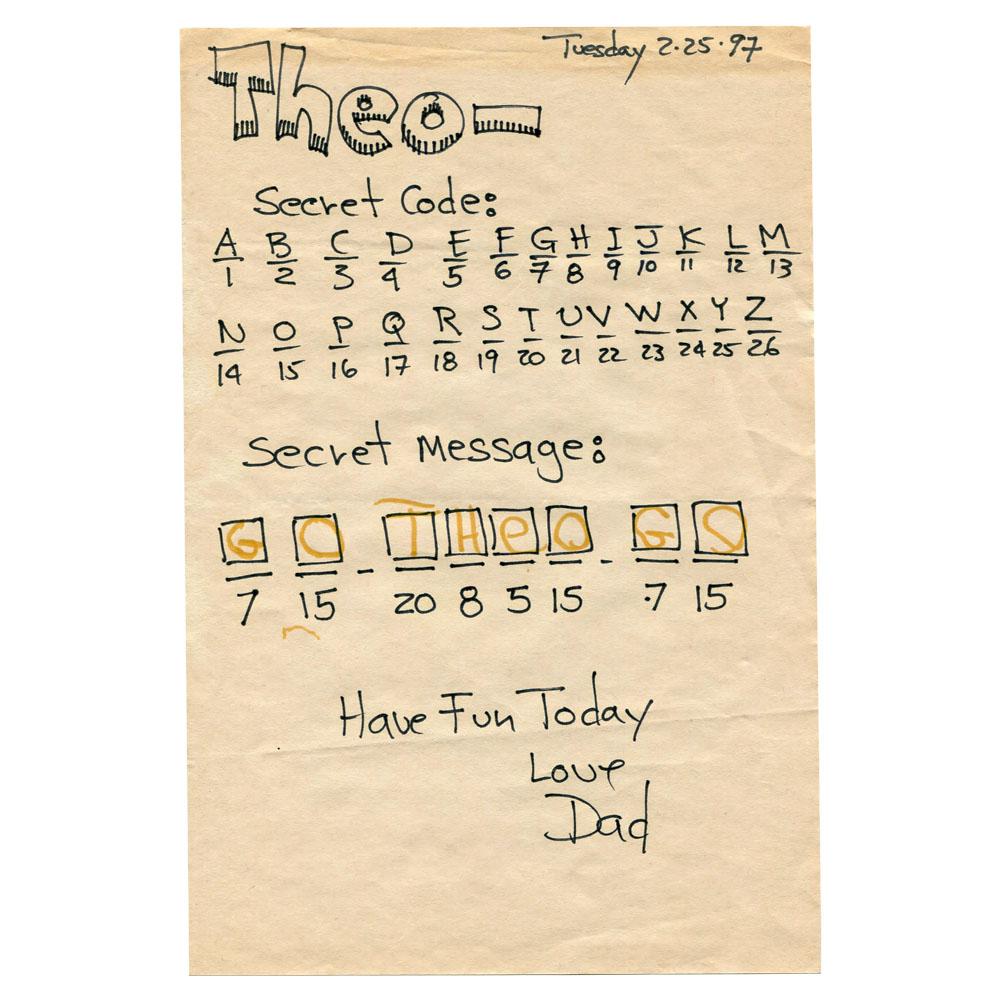 As I began curating this project, and reading through the piles of paper with my dad’s handwriting that have collected over the years in our home, I reflected on what it all means to me today; to still have these notes in my possession.

When I was a kid, reading the notes was a daily ritual for me, just as writing them was for my dad. It was the only thing I knew – I couldn’t remember a morning when I didn’t have a folded piece of paper to pull out of my lunchbox or back pocket. 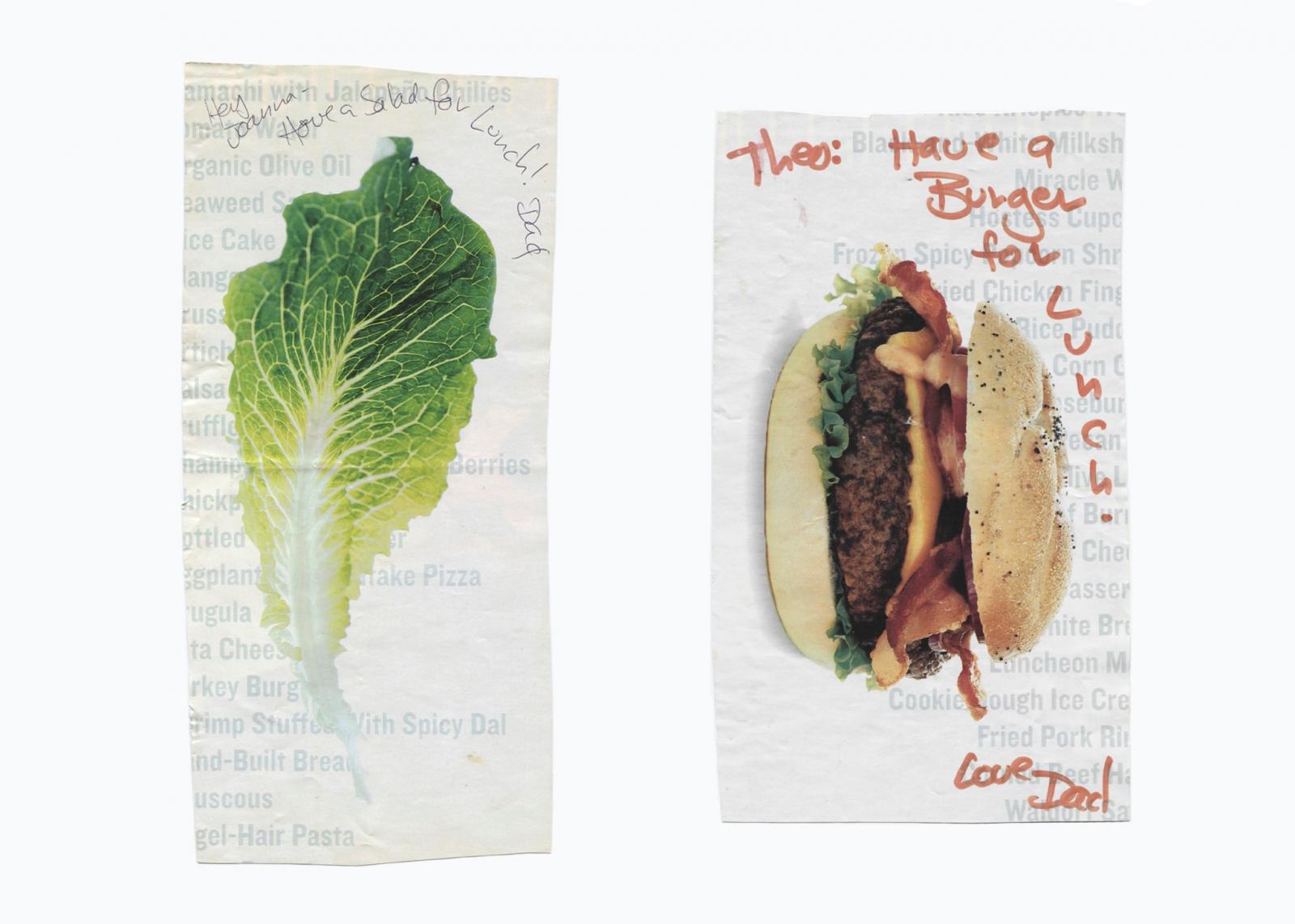 I do remember days when I’d get caught up studying for a test, stressing out about an upcoming game, or concerning myself with some adolescent drama, and I’d forget to read the note while at school.

On those days I’d come home, see the freshly wrapped triangle still intact, and feel a pang of guilt. I can remember feeling disappointed at myself, and would unfold the note quickly to read it and ease my conscience. 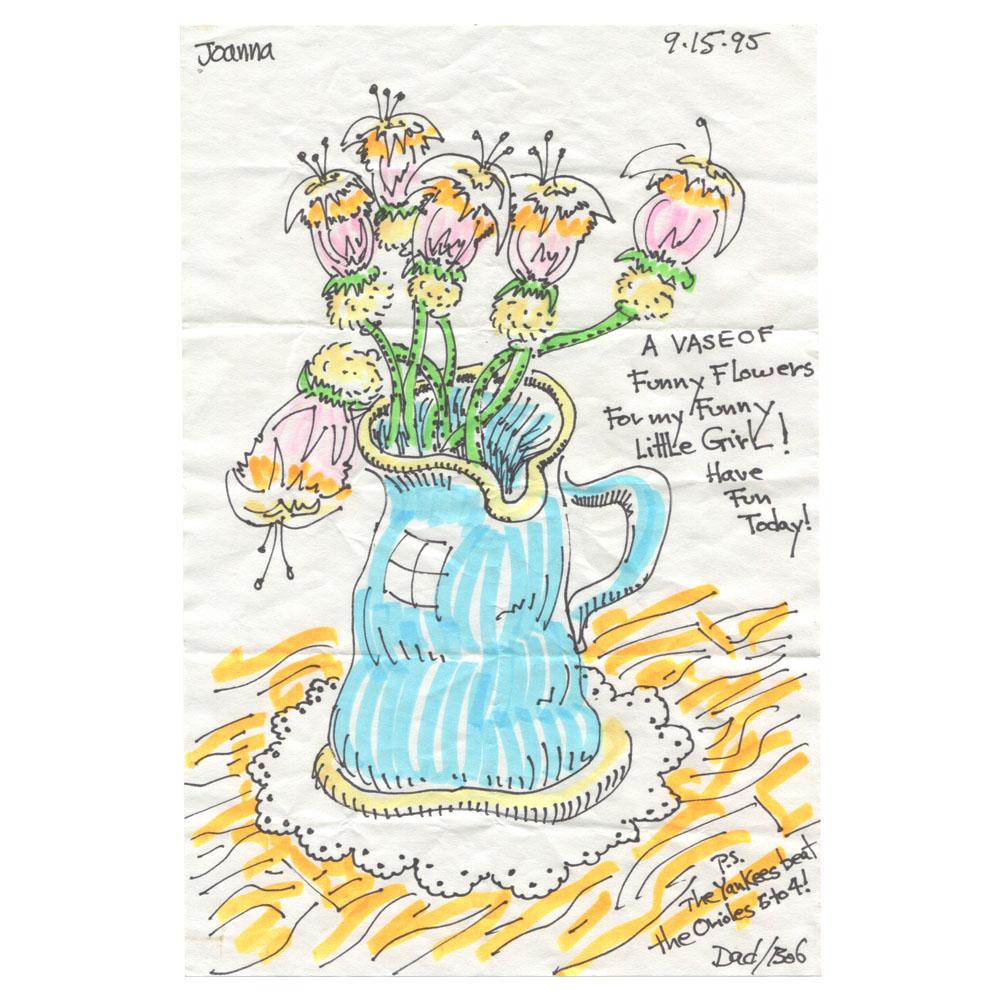 Reading the notes was something I knew was important for me to do everyday, but in hindsight, I didn’t grasp exactly why it was so important until I became an adult myself.

The other day my dad found an email I sent to him when I was a Junior in college. I must have talked to my mom earlier that day and found out that he was on his “last week” of writing the daily notes to Theo. 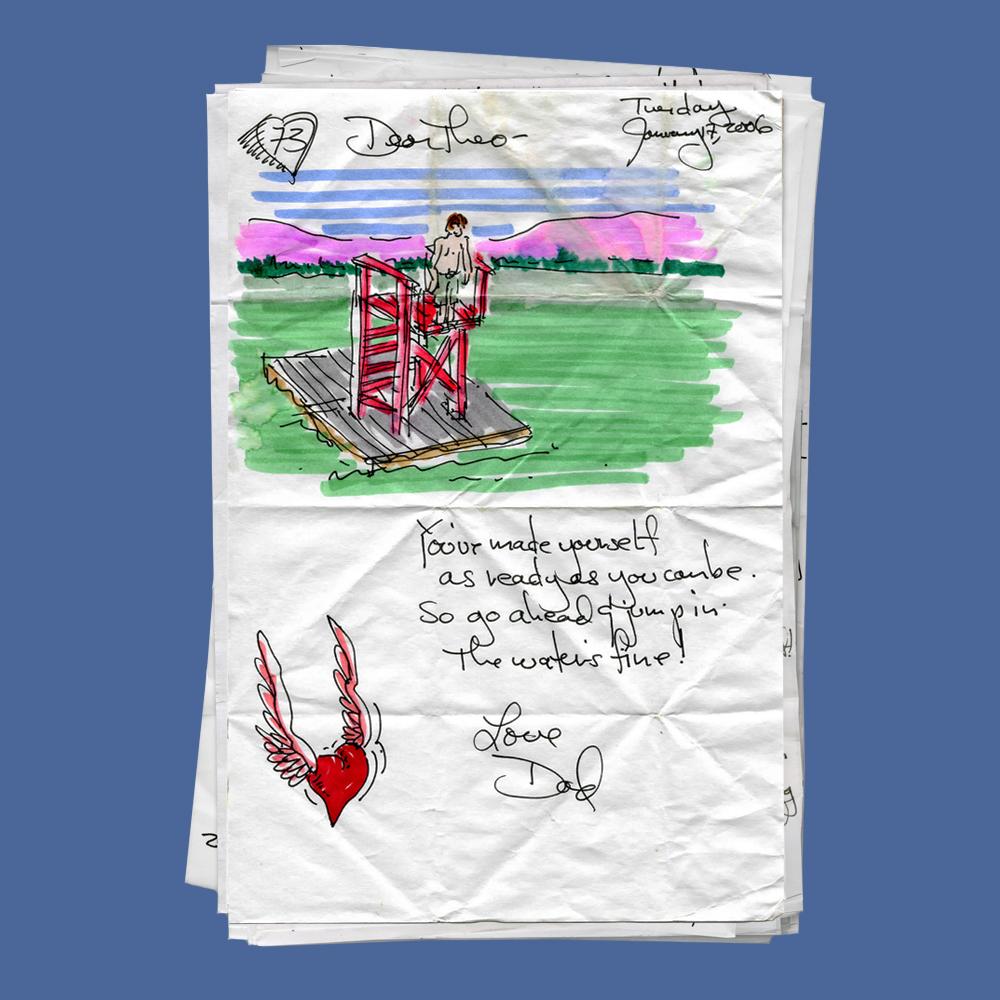 So, I wrote to him to say thank you.

I let him know that I still had one of his notes hanging in my dorm room, and that I believed the “amazing words of wisdom” he shared with us daily were “simple and true.”

Before parting, I said:

“Don’t think about the notes being over after this, cause they’ll never be finished sending their message.” 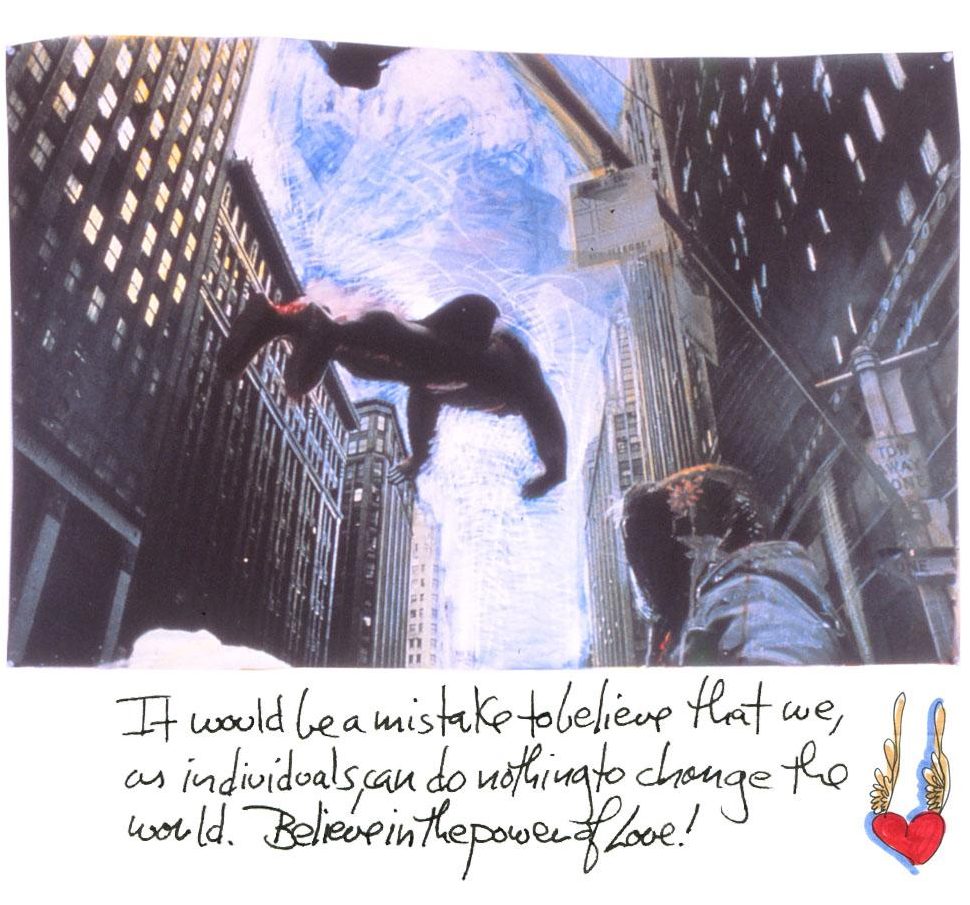 When I wrote this, I was studying abroad in Sydney, Australia (not exactly the most “reflective” part of my university life) and I certainly had no idea what was in store for the notes over the years to come.

In fact, I had assumed most of them had physically vanished over the years… unaware that my mom had carefully filed thousands of them away in shoe boxes around our home. 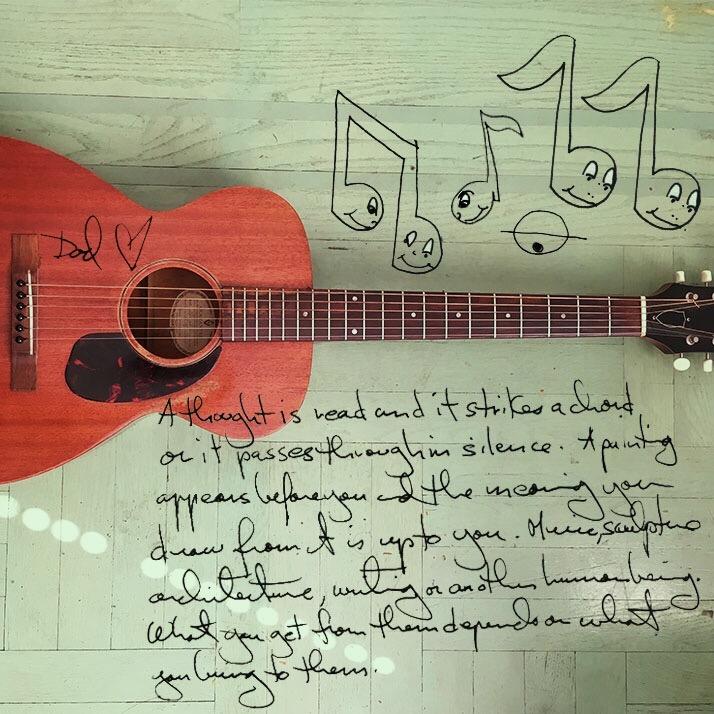 But metaphysically, spiritually, emotionally, or however you want to say it – I knew, even in that moment, that the love and care these notes expressed was special and long lasting.

And so, years later, now that I’ve had the chance to look back on all the notes, I’ve realised how many are filled with the relatable and raw writings of someone who is so clearly working through the process of becoming their best self.

They aren’t just sentiments of love that I knew I had daily in my pocket. They are important, brief expressions of wisdom that carry universal messages. 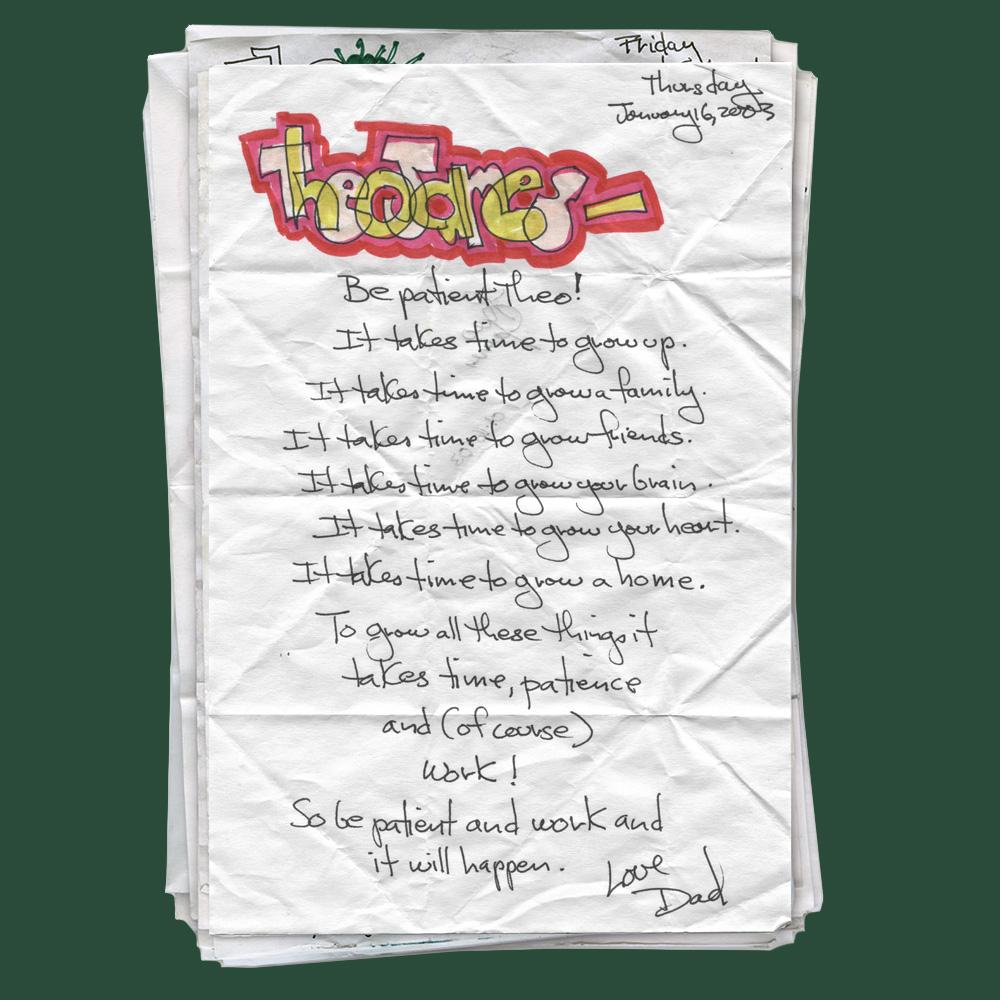 The notes in many ways are about my dad and his journey. His drive towards becoming a good parent, being a good husband, acting as a loving brother, son and friend, and sharing with his kids his own reflections on life.

But they are about more than just our family alone, and that is the lesson from the notes that I simply couldn’t have known on a weekday afternoon in the middle school cafeteria, or from a dorm room in Sydney.

The truth is that the lessons they impart are folded in each piece of paper and can be interpreted, digested, and embraced differently by anyone who gets their hands on them.

So after all these years, they’ve become not only a joy for me to revisit, but to share.

To see more of Bob’s writing, check out the posts Joanna shares on Instagram at @foldedwisdom – they are well worth a follow to brighten up your Insta feed every morning.

And for more information on Joanna’s Folded Wisdom project and her reasons behind it, more details can be found over at www.foldedwisdom.com. 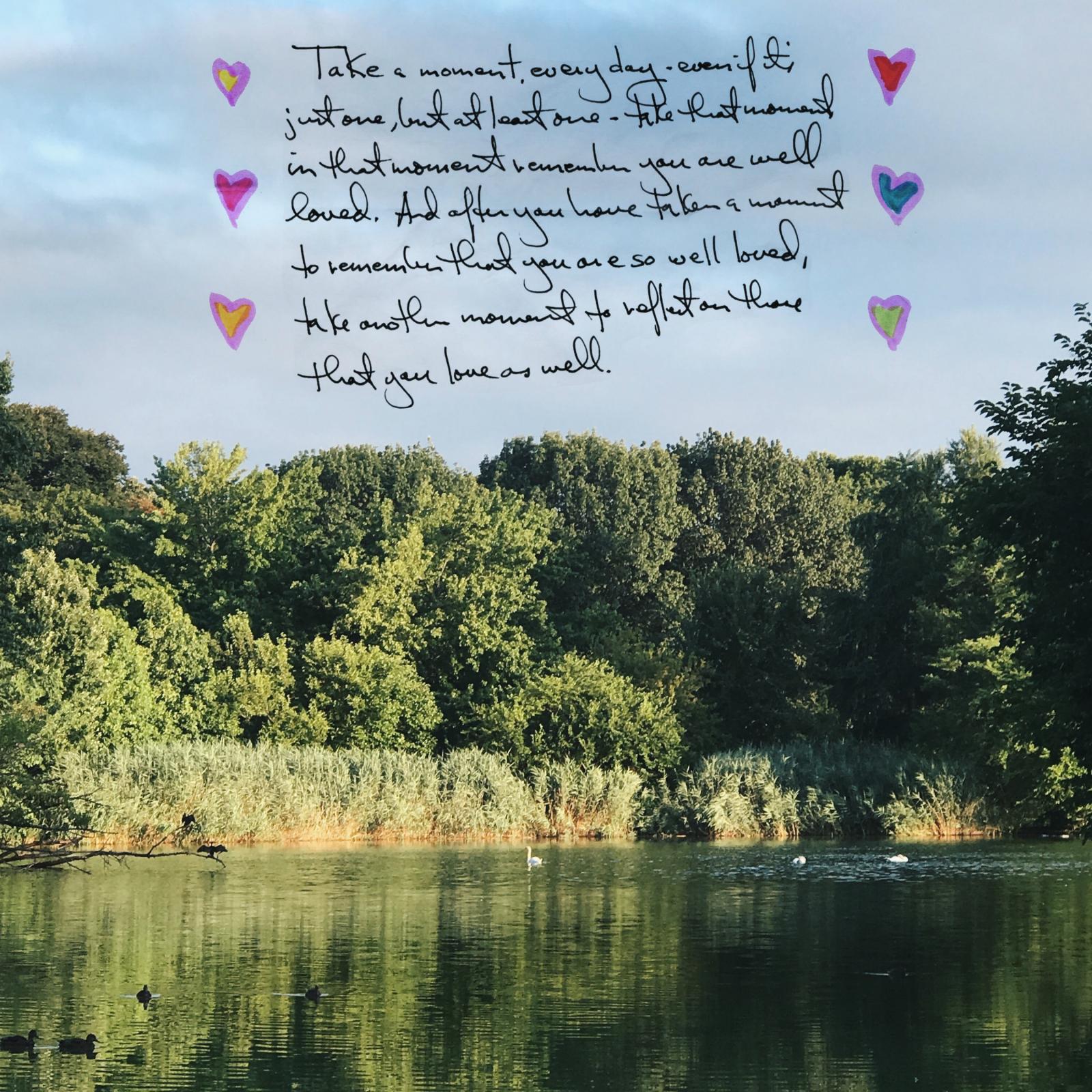