If your baby had (or still has) a tongue tie, or if you know any new parents whose babies suffered from one, you will be well aware of the serious physical and emotional pain that tongue ties can cause.

Every year, around 70,000 babies in the UK are born with a tongue tie. But despite being easily fixable with a tiny (and painless) snip, due to the limitations of current NHS policies and budgets, a huge proportion of these cases are misdiagnosed or left untreated for weeks on end.

As a direct result, thousands of new mothers and fathers are forced to go through immeasurable stress and unnecessary pain during these most precious (and seriously vulnerable) early weeks of parenthood, while at the same time struggling to find the help they desperately need from our national health system.

But thanks to a landmark new petition, this horrible new parent problem could soon be a thing of the past…and this is where we need your help. All we’re asking for is a minute of your time. 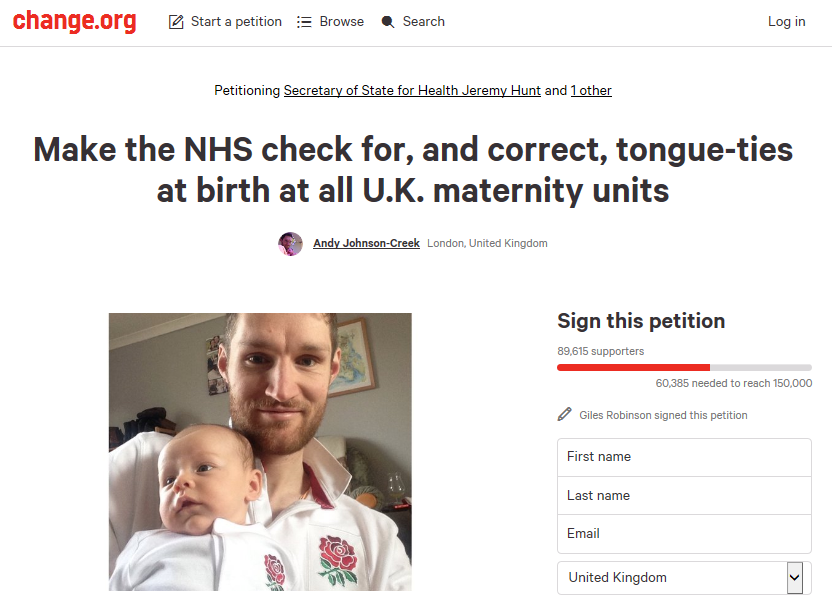 After seeing his wife suffer through the torture of a tongue tie with their new baby, the incredible Andy, a first time father and creator of London dad blog, The Debut Dad, recently launched a national petition, calling for the Government to change NHS policy on tongue ties. His goal; to get all NHS Trusts and hospitals to deal with this problem at birth, to save thousands of parents the serious amounts of pain, time and money needed to get tongue ties fixed themselves.

Thanks to Andy’s tireless efforts, in just five weeks, the petition has received an incredible response, collecting more than 89,000 signatures so far. But if it reaches 150,000, that’s when things get interesting, as it will be big enough to command the attention of Jeremy Hunt (Secretary of State for Health) and Simon Stevens (CEO of NHS England), ensuring the topic gets the national platform it deserves.

So today I’m asking you lovely people to throw your collective support behind this hugely worthwhile campaign. Tell your friends, family and colleagues, share this on Facebook and Twitter, and together, let’s give this the last big push it needs to become national news.

It only takes a minute, so please click here to add your name to the petition and, in the process, help thousands of future parents of tongue tied babies get the timely help they need, when they need it most!

But don’t just take my word for it. To help convince you, I’ve asked Andy, AKA The Debut Dad, as well as two first time mums (the lovely Karen and Holly, who recently experienced first hand the worst affects of a tongue tie) to tell you more about this incredible petition, while sharing their own personal experiences with us all today… 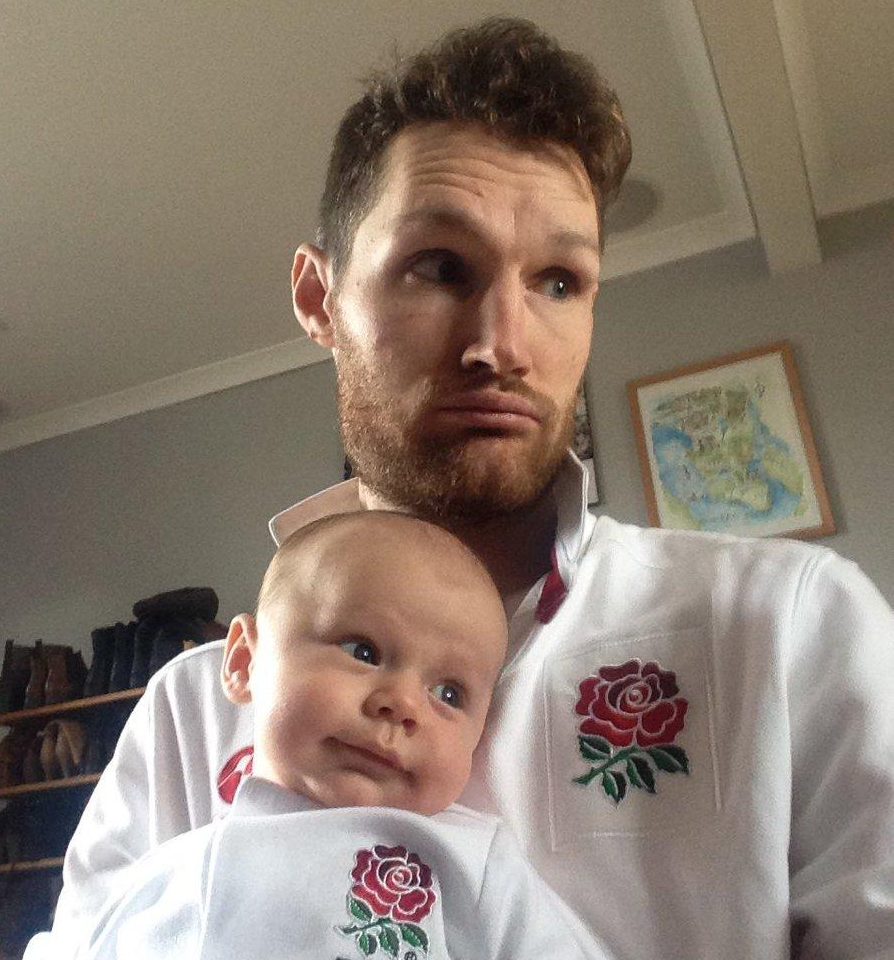 Earlier this year, I became a first-time dad to a baby boy. But, like one in 10 other babies born each year in the UK, the poor little guy was born with his tongue tied.

Babies with a tongue tie have limited movement of their tongue and jaw, leading to, in most cases, excessive biting during breastfeeding. As well as being excruciatingly painful and damaging for the mum (every single time they feed), it also results in the baby developing a terrible feeding technique, which leads to the baby sucking in more air than milk.

What this means is that a baby with a tongue tie will struggle with excessive colic, gas and acid reflux (if you’ve seen a baby with colic it is literally the worst to watch and listen to), lack of sleep, stress, and potential speech impediments later in life.

Correcting a tongue tie takes no more than 15 seconds, by snipping the offending bit of skin with scissors. It’s almost painless, and the baby is fine afterwards. In other countries, like France and Italy, this is taken care of in the hospital at birth. In the UK, there used to be a trained tongue tie practitioner (usually a midwife) on most maternity units who could do this. But this is no longer the case.

The midwives dealing with us (who were fantastic throughout) identified the tongue tie straight away, but said that they couldn’t deal with them in the maternity unit anymore. Instead they referred us to our GP, who we managed to see a week later. She then booked us in to correct the tie, ten weeks later…

A week, let alone ten, is far too long for a tongue tie to go uncorrected. So, we, like so many other parents, were forced to pay to have it corrected privately.

But, of course, many parents can’t afford to go private (the average cost is around the £300 to £400 mark, with BUPA doing it for £1000). Those poor souls have to go through all the pain – for both the baby and the mother – for weeks and weeks before anything can be fixed through the NHS.

On top of that, new mums are put under immense pressure to breastfeed their babies – from midwives, NCT teachers, and society in general. Although this is changing, there is a perception that a mother who formula feeds her baby early on is a ‘failing mother’. But a tongue tied baby means breastfeeding can be a physically and psychologically torturous ordeal every few hours.

This is simply unfair, and in my opinion hugely cruel, considering how quick and easy it is to deal with.

Which is why I set up this petition to try and force all NHS Trusts and hospitals to deal with tongue ties at birth, or at the very least only a few days after.

HEE, in turn, get local NHS Trusts to ensure appropriate services are available for the diagnosis and treatment of tongue tie. Various Trusts work differently meaning that some hospitals correct tongue ties weeks or even months after a baby is born, whilst others deal with it immediately.

It’s therefore a postcode lottery, which should not be the case. Reading some of the comments from people who have signed the petition is simply heart-breaking, and proves that my own experience was not a one off.

The petition is calling on the Government and HEE to ensure every local NHS trust/hospital correctly identify and correct tongue ties before parents and babies are discharged from hospital; or at the very least only a couple of days afterwards.

This isn’t a hugely costly policy ask. It is common sense. More than 89,000 people so far agree…that’s more people than could fill Twickenham Stadium.

It’s time for the NHS to do something about it. So, if you agree, please do sign and share the petition! 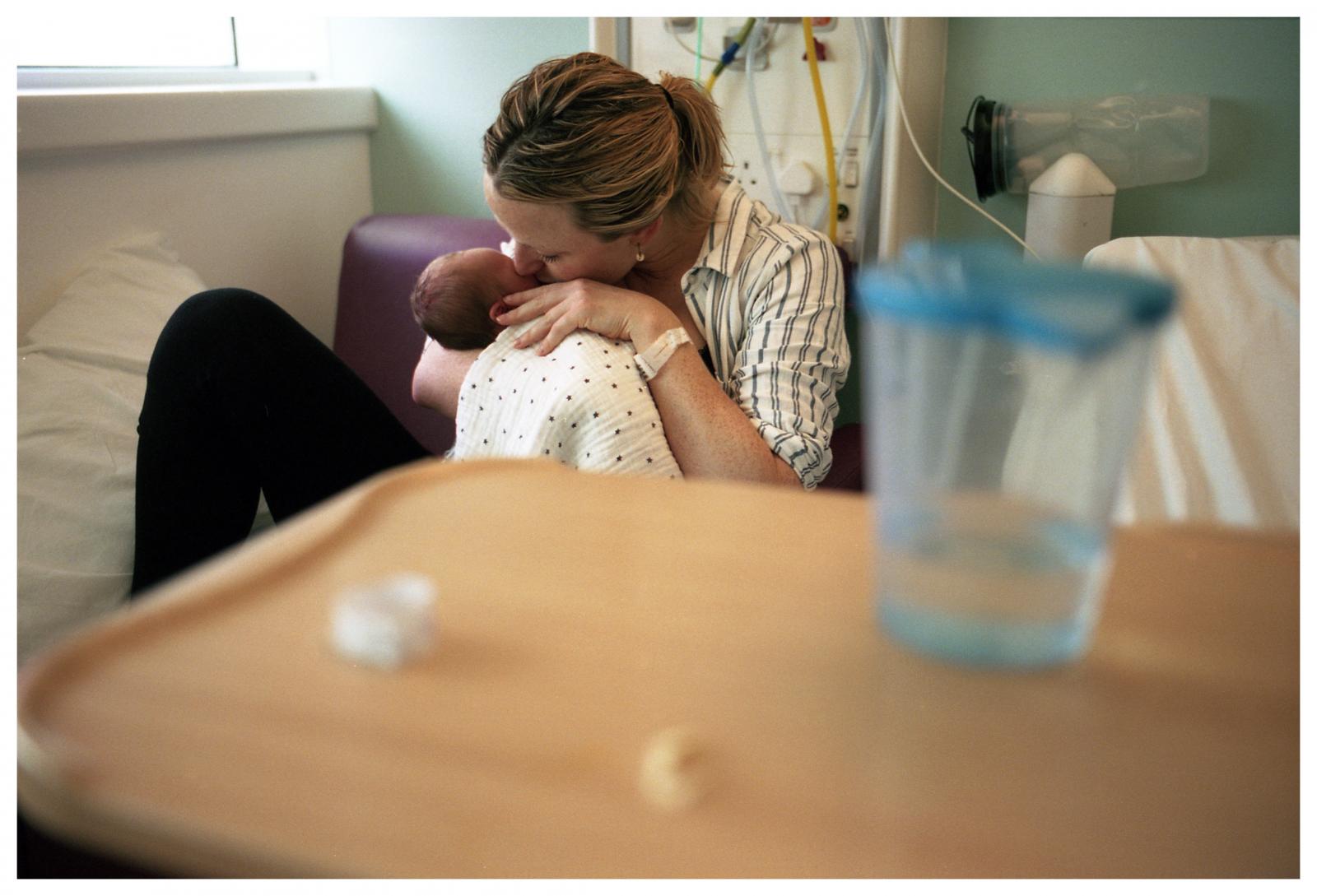 Two days after I gave birth to my son Morley, a midwife told us that he had a tongue tie. It gave me a potential reason for why I was finding it impossible to breastfeed. At that time I was having to syringe colostrum from my nipples and then push it into his mouth. It wasn’t the magical breastfeeding experience I was anticipating.

I am genuinely annoyed with the system when it comes to anything associated with breastfeeding. From my experience you’re made to feel it’s against the law to not exclusively breastfeed your child for a strict minimum of SIX MONTHS! And, if you want to question it, you’ll have to go up in front of the ‘Breastapo’ – a group of people unwilling to accept or suggest any alternative.

Once we had the diagnosis, our hospital said it was likely we’d have to wait three weeks for the procedure to release his tongue tie and, hopefully, allow him to feed better. For a mother struggling to feed her newborn this felt like three years so, in the hope to avoid starving my child, I looked into how I could bypass the NHS and find someone to do it privately. Thankfully, due to a cancellation, our NHS appointment came through earlier than expected and we avoided having to pay up to £600 for the same thing.

The procedure itself was unsettling but straightforward. We hung onto the 80% success rate statistic they shared with us, hoping we’d return home and Morley would sprint to my breast and drain it in one long suck. Not so.

In reality I returned to my feeding hell, countless visits to local breastfeeding clinics (which provided conflicting and confusing advice), consultations with a lactation specialist, blistering and bleeding nipples and a few cursory phone calls from the tongue tie clinic.

Ultimately the drawn out nature of all of this resulted in me turning to a pump-to-bottle method of getting breast milk into Morley, which I had simply come to terms with. Whether his tongue tie had grown back (which is common), or whether Morley just didn’t like my boobs, I will never know.

I know we shouldn’t moan about the NHS – it is incredible, as was my prenatal and birthing experience. However the support and advice it supplies women on breastfeeding in particular is disappointing, inconsistent and incomplete. 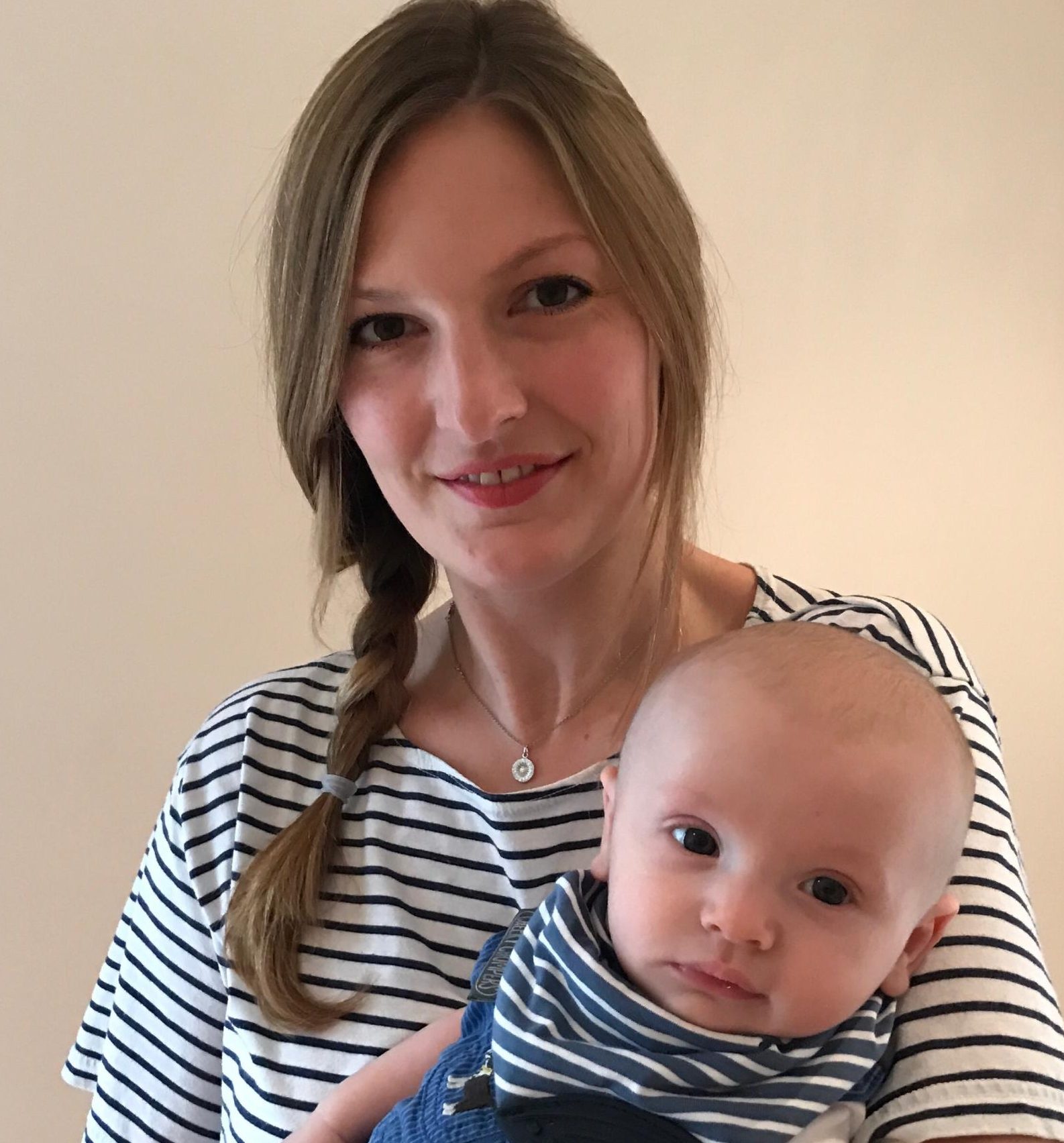 We were told in hospital by the paediatrician that Otto had a ‘mild’ tongue tie, but it shouldn’t cause any issues. As a result, I spent the first few days post birth in agony, crying every time I fed him, with the midwives simply saying ‘it always hurts at first’ thinking that the pain must be due to a bad latch. After all, the paediatrician must be right!

Tongue tie had a massive impact for me on early bonding: I dreaded feeding him, dreaded his cry and felt incredibly guilty. By chance, I mentioned what I was going through to an acquaintance who said she’d had the same symptoms and had her baby treated privately.

The NHS were insistent that two lactation consultants should see me feed to refer me for treatment and that Otto should be older than 10 days; I was horrified. The idea of feeding even one more time and waiting that long filled me with dread (I was expressing by this point due to blisters).

So we went privately and discovered that Otto had an 85% posterior tie, certainly not ‘mild’. The moment it was snipped the difference was incredible; feeding didn’t hurt, he drank more and the blisters vanished. Amazingly 3 of my NCT group (of 8 couples!) experienced some form of tongue tie, so it is fairly common. But there seems to be very poor awareness out there.

We were fortunate enough to have the funds available to pay privately for speedy treatment, and I imagine many couples simply give up breastfeeding if they’re unable to do this due to the pain and the wait. NHS policy on this issue in my view undermines all of the great work that it does to promote breastfeeding, which is a real shame.

Thank you for taking the time to read this post and I hope we’ve done enough to convince you to sign up and have your voice heard on this hugely important issue.

If you haven’t already, please join me and 89,000 other parents by adding your signature to Andy’s petition here, while helping spread the word on social media.

Together, let’s give this campaign the national recognition it deserves!